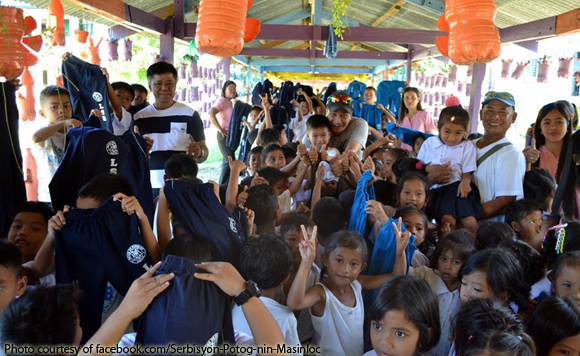 Aquino, Eamilao, Elbo and Acierto are aspiring for the position of municipal councilor in next year’s mid-term polls, under the “Team Serbisyon Potog” slate headed by Lim and vice-mayor reelectionist Pedro Enciso. The team is running under the Partido Federal ng Pilipinas.

Photos accompanying the Facebook post showed the politikos personally carrying some of the school children items and handing them out to students of San Salvador Elementary School.

The Commission on Elections had said that campaign period for candidates for members of the House of Representatives and elective regional, provincial, city and municipal officials will start on March 30, 2019 and end on May 11, 2019.(END)

Politiko would love to hear your views on this...
Spread the love
Tags: Aaron Eamilao, Barangay Captain Norman Acierto, Barangay Kagawad Rommel Elbo, Commission on Elections, House of Representatives, Masinloc, Masinloc Mayor Arsenia Lim, ouncilors Arnel Aquino, Zambales
Disclaimer:
The comments posted on this site do not necessarily represent or reflect the views of management and owner of POLITICS.com.ph. We reserve the right to exclude comments that we deem to be inconsistent with our editorial standards.