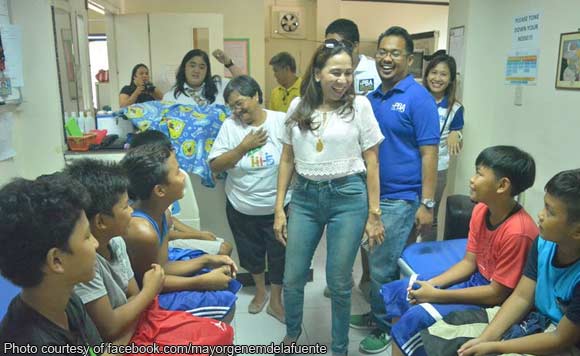 Samal town Mayor Gene de la Fuente tried to lift the spirits of some boys who were availing of the free circumcision service in her city on Friday, April 21.

The politiko was seen smiling and laughing with the boys, who were sitting on benches before their procedure.

“In Philippine culture, circumcision is an integral part of a rite-of-passage to manhood. Thus, to help young Samaleños get through this stage, a free circumcision service was conducted by the LGU headed by Mayor Gene Malibiran Dela Fuente with the support of Vice Aida Macalinao and SB Members at the Samal Birthing Clinic, April. 21,” said De La Fuente.

The mayor even accompanied one boy and sat by his bed as the latter’s circumcision was on going.

Tags: circumcision, Mayor Gene De La Fuente, Philippine culture, politiko, Samal Birthing Clinic, Samal town, SB Members, Vice Aida Macalinao, young Samaleños
Disclaimer:
The comments posted on this site do not necessarily represent or reflect the views of management and owner of POLITICS.com.ph. We reserve the right to exclude comments that we deem to be inconsistent with our editorial standards.