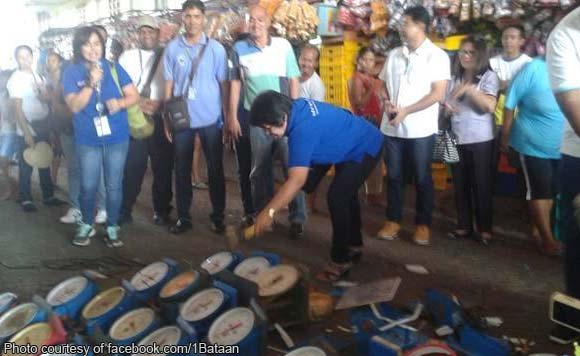 Watch out, swindlers! Bataan officials are having none of it!

Orani Vice Mayor Godofredo Galicia Jr. recently hammered the 97 pieces of substandard weighing machines that were seized by local officials from 2012 to 2017 at the Orani Public Market on Tuesday, April 11.

The politiko was joined by Department of Trade and Industry (DTI) Bataan provincial director Nelin O. Cabahug in the activity.

Galicia said the municipal government is currently evaluating the 15-year-old local market code to explore necessary amendments, including updating provisions on the penalties for violators.

Politiko would love to hear your views on this...
Spread the love
Tags: Bataan provincial director Nelin O. Cabahug, Department of Trade and Industry, Orani, Vice Mayor Godofredo Galicia Jr.
Disclaimer:
The comments posted on this site do not necessarily represent or reflect the views of management and owner of POLITICS.com.ph. We reserve the right to exclude comments that we deem to be inconsistent with our editorial standards.