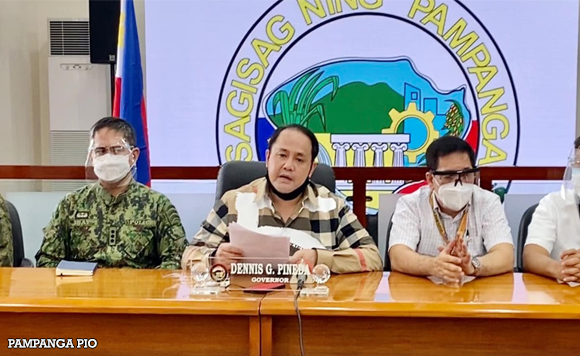 In his live public address, Governor Dennis Pineda released an executive order for the stricter measures for the arrival of visitors in the province.

Pineda also said from March 20 to April 5, the Pampanga police and barangay officials would set up mandatory checkpoints in their areas.

Likewise, only those 18 years to 60 years old are allowed to go outside their residence only for essential purposes. Pregnant women are prohibited from going outside for their safety.

“Wala na hong pakiusapan. Kapag nahuli po mga anak ninyo nasa labas, kayo pong mga magulang ang kakasuhan namin (There is no more appeal. Once your children are caught outside, we will file a case against you),” he warned parents.

Pineda also said a liquor ban would be imposed while curfew hours have been set from 10 p.m. to 5 a.m.

Pineda said business establishments, such as groceries and restaurants, would be allowed to operate at 50 percent maximum capacity while observing proper distancing and health protocols.

New infections in the province were reported at 120 on Thursday and 75 on Friday morning due to local transmission.

As of Thursday, the province had 757 active cases. At least 7,421 people have recovered from the disease while deaths were placed at 449.

Residents have been required to comply with safety protocols, such as the wearing of face masks and shields, maintaining a physical distance of one meter to two meters, and avoiding crowded gatherings.

Politiko would love to hear your views on this...
Post Views: 24
Spread the love
Tags: antigen test, Covid-19, Governor Dennis Pineda
Disclaimer:
The comments posted on this site do not necessarily represent or reflect the views of management and owner of POLITICS.com.ph. We reserve the right to exclude comments that we deem to be inconsistent with our editorial standards.