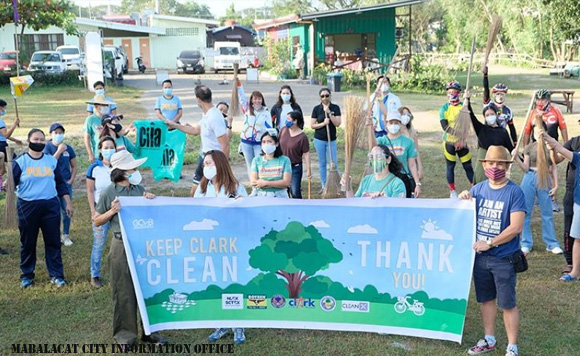 The city government of Mabalacat is backing the “Keep Clark Clean” initiative of the Greater Clark Visitors Bureau (GCVB), according to a Philippine Information Agency report.

The initiative “aims to involve different sectors to drumbeat awareness in keeping the environment clean, and promote the responsible use of public areas inside Clark Freeport Zone,” the report said.

Mabalacat City Mayor Crisostomo Garbo said the use of public spaces for recreation has been so popular ever since the Enhanced Community Quarantine (ECQ) was lifted, “however, the irresponsible use of these spaces calls for a multi-sectoral action.”

“During the past months, photos of filthy areas inside Clark went viral on social media due to irresponsible use of open grounds inside the Freeport,” he was quoted as saying.

“This triggered alarm to us for such an act towards our environment is never acceptable,” Garbo said in the report.

The mayor reminded the public that utilization of public spaces “comes with the responsibility of keeping it clean and tidy.”

“It is our duty to take good care of our surroundings and make these areas prepared for everybody’s use,” he said in the report.

Politiko would love to hear your views on this...
Post Views: 5
Spread the love
Tags: Clark Freeport Zone, drumbeat awareness, Greater Clark Visitors Bureau, Keep Clark Clean, Mabalacat
Disclaimer:
The comments posted on this site do not necessarily represent or reflect the views of management and owner of POLITICS.com.ph. We reserve the right to exclude comments that we deem to be inconsistent with our editorial standards.