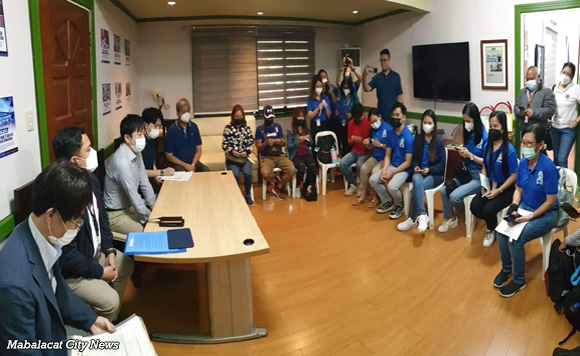 The Mabalacat City government hosted on Wednesday a dialogue between the Department of Transportation (DOTr), Japan Foreign Ministry and the affected families of the Malolos-Clark Railway Project (MCRP).

The dialogue was held at Mabalacat City Hall Annex to discuss the “Strengthening the Transition of Vulnerable Communities” (STVC) project of the DOTr.

The project is funded by the Japan Fund for Poverty Reduction and implemented by NIRAS Asia Manila Inc. in partnership with the World Vision Development Foundation Inc. “to ensure the sustained livelihoods and welfare of the families affected by the MCRP.”

According to Transportation Undersecretary Timothy Batan, the project focuses not only on infrastructure but also seeks to alleviate social costs, particularly the impact on affected families including informal settlers.

Three affected families and informal settlers of the MCRP in Mabalacat City have been safely relocated in Barangay Atlu Bola under the project.

Politiko would love to hear your views on this...
Spread the love
Tags: DOTr, Japan ministry, Mabalacat City, Mabalacat City Government, Malolos-Clark rail project
Disclaimer:
The comments posted on this site do not necessarily represent or reflect the views of management and owner of POLITICS.com.ph. We reserve the right to exclude comments that we deem to be inconsistent with our editorial standards.