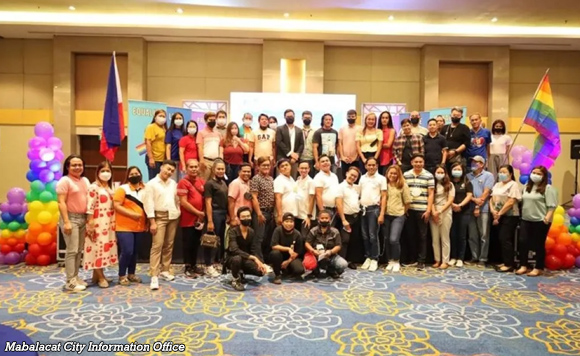 The forum was organized by the city’s Population, Gender, and Development Office (PopGAD)

PopGAD officer Charlo Costales and Aloi Renz Santos of the Commission on Human Rights discussed and presented the anti-discrimination ordinance for Mabalacat City including the rights of the sexual orientation, gender identity, gender expression, and sex characteristics.

The anti-discrimination ordinance will be forwarded to the city council for further review and approval.

According to Commission on Population and Development – Region III assistant director Adrenal Denver Monterona, the local government units respond in enacting its anti-discimination ordinance to uphold the rights and needs of those with diverse sexual orientation.

Monterona said that Mabalacat City will soon be included in the roster of LGUs to join the fight against discrimination once the anti-discrimination ordinance has been released and implemented.

“This Pride Month celebration is the very first in Mabalacat. This is a good baby step for the city,” he said.

“The commission on population and gender development is one with all of us in upholding gender and development and its ideals,” Monterona said.

Politiko would love to hear your views on this...
Spread the love
Tags: 1st Pride Month, LGBTQIA+, Mabalacat City
Disclaimer:
The comments posted on this site do not necessarily represent or reflect the views of management and owner of POLITICS.com.ph. We reserve the right to exclude comments that we deem to be inconsistent with our editorial standards.