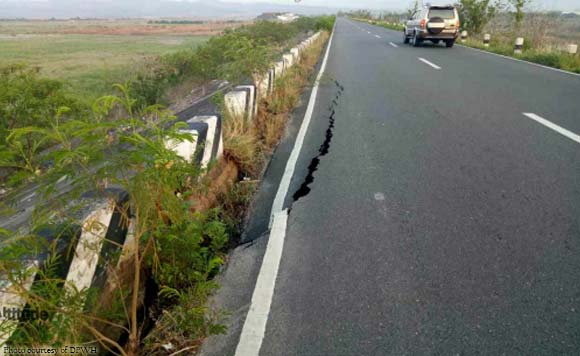 MANILA — At least P50 million worth of damage to irrigation canals and dams was caused by the 6.1 magnitude earthquake struck parts of Luzon earlier this week, Agriculture Secretary Manny Piñol said on Tuesday.

Piñol, however, assured that agricultural production will not be affected following the quake.

“Sir, aside from 50 million pesos worth of damage on irrigation canals and dams, there’s not much damage in agriculture. Our production and our production targets will not be affected,” Piñol told President Rodrigo Duterte during a situation briefing in San Fernando, Pampanga on Tuesday.

The Agriculture chief also assured the public that the agency has ready rice stocks available for families affected by the quake.

Duterte, for his part, commended Piñol for keeping rice stocks on standby.

The President recalled how the country encountered the delayed arrival of imported rice, as well as the temporary absence of National Food Authority (NFA) rice in the market.

“When I assumed office, I had in mind na (that) this thing about rice will not be a problem at all. And I must… You were there and you delivered a long speech. I was quite confident. But really, to my horror, it came. And so we had to import,” Duterte said.

On February this year, Duterte signed the rice tariffication bill into law which amends the Agricultural Tariffication Act of 1996 and replaces the quantitative restrictions (QR) on rice imports with tariff.

Meanwhile, the Department of Labor and Employment (DOLE) said it will facilitate the reemployment of employees working for Chuzon supermarket who will be affected by the suspension of its business operations.

DOLE, which encouraged Chuzon employees to attend an upcoming job fair on May 1, also vowed to provide livelihood assistance for those who fail to get accepted.

Duterte ordered the suspension of business operations of all Chuzon supermarkets after one of its buildings collapsed in Porac town due to damage obtained from the quake.

“It would be good at this time to just give them the advice to stop, cease and desist doing business until such time that the clearance is given by the government,” Duterte said.

Interior Secretary Eduardo Año said his agency will soon be issuing a memorandum circular to temporarily suspend all Chuzon supermarkets’ business permits until their buildings’ structural integrity have been re-assessed. (PNA)

Politiko would love to hear your views on this...
Post Views: 0
Spread the love
Tags: Agriculture Secretary Manny Pinol, DOLE, NFA, Porac town
Disclaimer:
The comments posted on this site do not necessarily represent or reflect the views of management and owner of POLITICS.com.ph. We reserve the right to exclude comments that we deem to be inconsistent with our editorial standards.