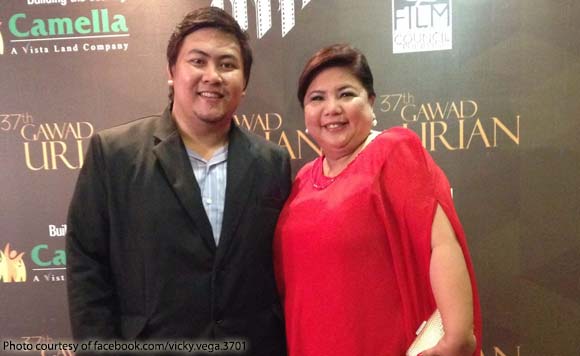 Did you know that Angeles City Vice Mayor Vicky Vega used to be a celebrity?

Back in the day, she would attend different awards nights and would be joined by fellow celebrities on the red carpet. The vice mayor shared a memory on Facebook that probably made her miss the show business a bit. The photos were taken during the Urian Awards Night. She was able to get a photo with Ms. Angel Aquino (Best Actress), Mr. Junjun Quintana (Best Supporting Actor), Direk Jason Paul Laxamana (nominee, Best Screenplay) Mr. Alex Medina (nominee, Best Actor), Mr. Diego Dobles (Nominee,Best in Cinematography), Mr. Glenmark Doromal (Best Short film) and Ms. Teri Malvar (nominee, Best Actress).

Politiko would love to hear your views on this...
Spread the love
Tags: Angeles City, Urian Awards Night, Vice Mayor Vicky Vega
Disclaimer:
The comments posted on this site do not necessarily represent or reflect the views of management and owner of POLITICS.com.ph. We reserve the right to exclude comments that we deem to be inconsistent with our editorial standards.