Leaders of Cambodia, Myanmar arrive in PH for Asean summit 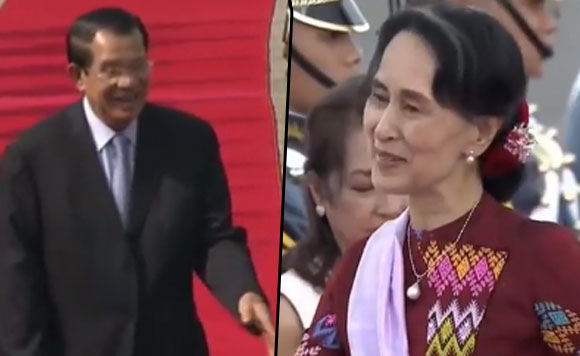 World leaders were starting to arrive on Saturday, November 11, at the Clark International Airport for the Association of Southeast Asian Nations (Asean) summit this week.

Cambodian Prime Minister Hun Sen was the first head of state to arrive in the Philippines for the summit. He landed in Clark around 1:26 p.m.

The government decided to make the leaders land in Clark instead of in Ninoy Aquino International Airport to avoid massive flight cancellations to and from the country’s capital.

From Clark, the leaders will travel to Manila on Sunday, November 12, to attend the Special Gala Dinner at the SMX Convention Center in the Mall of Arena Complex in Pasay City.

Politiko would love to hear your views on this...
Post Views: 0
Spread the love
Tags: Association of Southeast Asian Nations, Cambodian Prime Minister Hun Sen, Clark, Foreign Minister Aung San Suu Kyi, Manila, Pasay City, Philippines, Representative Gloria Macapagal-Arroyo
Disclaimer:
The comments posted on this site do not necessarily represent or reflect the views of management and owner of POLITICS.com.ph. We reserve the right to exclude comments that we deem to be inconsistent with our editorial standards.