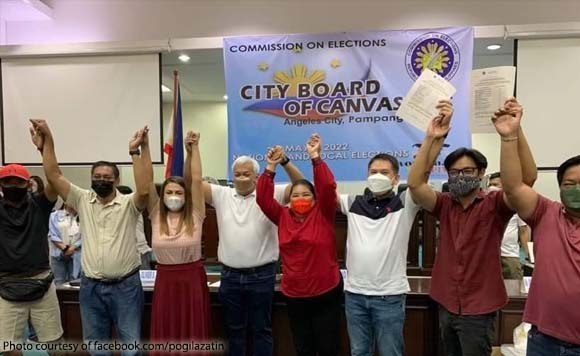 A day after the polls, the mayor led the cleanup of all election campaign materials, including posters and wall murals, from the streets of the city.

Team Lazatin personnel were seen in various barangays of the city removing and collecting used campaign materials, which will be disposed of in accordance with the advisory from the Department of Interior and Local Government (DILG) dated May 2.

They were joined by personnel from the City Environment and Natural Resources Office (CENRO) and the Angeles City Traffic and Development Office (ACTDO).

The advisory reminded LGUs to abide by the provisions of the Ecological Solid Waste Management Act of 2000 in disposing of campaign paraphernalia, especially ones made of plastic and other non-biodegradable materials.

“Tapos na po ang eleksyon at kampanya, now it’s time for us to clean up the propaganda materials around the city,” said Lazatin.

Politiko would love to hear your views on this...
Spread the love
Tags: Amos Rivera, Angeles City, Carmelo Lazatin
Disclaimer:
The comments posted on this site do not necessarily represent or reflect the views of management and owner of POLITICS.com.ph. We reserve the right to exclude comments that we deem to be inconsistent with our editorial standards.