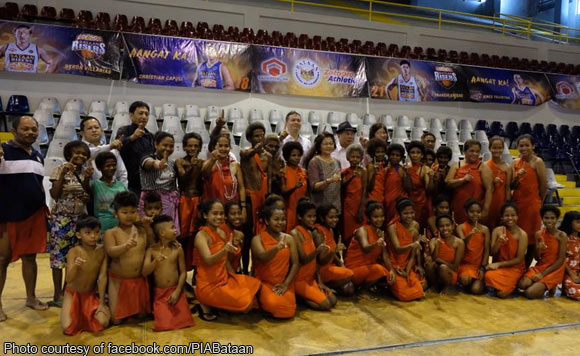 The Komisyon sa Wikang Filipino (KWF) launched on Monday in Bataan the country’s seventh Bantayog-Wika in recognition of the Ayta-Magbukun language.

Virgilio Almario, chairman of the KWF and of the National Commission for Culture and the Arts, and Bataan Governor Albert Garcia led the unveiling of the marker at the Bataan People’s Center in Balanga City, with members of the Aeta Magbukun tribe present.

A project of the KWF and Senator Loren Legarda, the establishment of Bantayog-Wika seeks to identify areas where Filipino languages originated, concretizing an intangible cultural heritage.

The Philippine Information Agency in Bataan said Almario found the Bantayog-Wika for Ayta Magbukun special because the native language is at risk of being forgotten.

He disclosed that along with the erection of the Bantayog-Wika is a plan to open a language center in Abucay town where the Ayta Magbukun will be taught.

According to an earlier statement of Legarda, the Philippines has 131 native languages, and the KWF, in coordination with local government units, aims to install 22 language markers across the country this year.

“We need to comprehensively document all active, endangered, and dying languages of our ethno-linguistic groups in the country, and we should promote the continued use of such languages,” Legarda had said.

August is a celebration of the Buwan ng Wika in the Philippines.

Politiko would love to hear your views on this...
Post Views: 15
Spread the love
Tags: Ayta-Magbukun, Balanga City, Bantayog-Wika, Bataan People's Center, Bukidnon, Governor Albert Garcia, Komisyon sa Wikang Filipino, Mindoro Occidental
Disclaimer:
The comments posted on this site do not necessarily represent or reflect the views of management and owner of POLITICS.com.ph. We reserve the right to exclude comments that we deem to be inconsistent with our editorial standards.