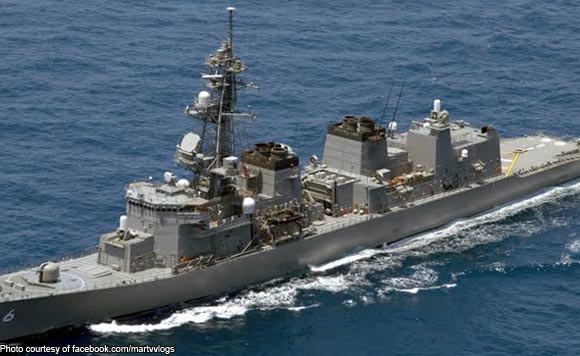 The three-day goodwill visit of the JS Samidare (DD-106), a Murasame-class destroyer, will further beef up ties between the Japan Maritime Self Defense Force (JMSDF) and the Philippine Navy (PN).

“The goodwill visit aims to strengthen the relationship between the PN and JMSDF. It targets to further enhance and sustain the promotion of peace, stability, and maritime cooperation of the two countries through naval diplomacy and camaraderie,” PN spokesperson, Captain Jonathan Zata, said in a statement Friday.

The naval vessel, which is carrying two SH-60 patrol helicopters and 200 officers and enlisted personnel, will stay in Olongapo until Sunday.

The JMSDF contingent is led by the Commander of Escort Division Four, Captain Takahiro Nishiyama. In his speech, he stated that the purpose of their visit is to deepen cooperative relationship with the Philippine Navy (PN) through various exchanges and interactions.

“I believe that this visit will make a great contribution to further strengthen relations between our two countries,” Nishiyama added.

Meanwhile, the welcoming PN delegation was headed by Captain Jose B. Petilla Jr., representative of the Navy flag-officer-in-command, Vice Admiral Robert A. Empedrad. The visit is the first for JS Samidare inthe Philippines and the second for the visit of the JMSDF this year and the eighth since 2016.

Similar to their previous visits, there will be a scheduled courtesy call to the head of Naval Education, Training and Doctrine Command; pre-coordination meetings; reciprocal reception; and shipboard tour.

A send-off ceremony with customary Passing Exercise (PASSEX) will cap off the JS Samidare’s visit. (PNA)

Politiko would love to hear your views on this...
Spread the love
Tags: Alava Wharf, Captain Jonathan Zata, Captain Takahiro Nishiyama, hilippine Navy, Japan Maritime Self Defense Force, JS Samidare, Olongapo City., Philippine Navy, SBMA
Disclaimer:
The comments posted on this site do not necessarily represent or reflect the views of management and owner of POLITICS.com.ph. We reserve the right to exclude comments that we deem to be inconsistent with our editorial standards.