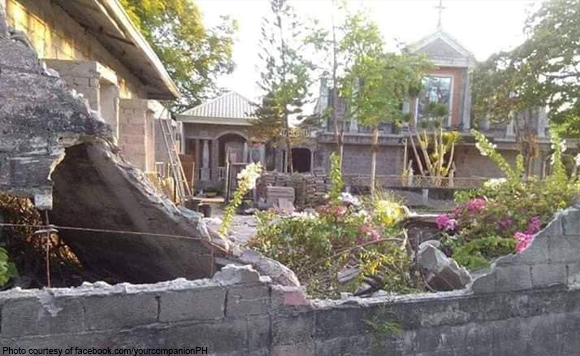 MANILA — The initial cost of damage to national roads in Central Luzon caused by the magnitude-6.1 earthquake that struck on Monday is estimated at PHP200 million, the Department of Public Works and Highways (DPWH) said on Tuesday.

DPWH Secretary Mark Villar, in an interview via Facebook, said the
province of Pampanga was badly hit as several roads, bridges, and
buildings have been damaged.

“There is quite big damage in Pampanga. In other provinces, we have
yet to receive reports of major damages on national roads. Consuelo
Bridge (in Floridablanca town) is completely closed. Our assessment
team is on its way. So far, there is no major damage on the bridge.
Hopefully, by today, it will be passable to light vehicles but we will
continue our assessment on it for safety reasons,” the DPWH chief
added.

Villar added that there were also damages reported at the Mega Dike
Access Road in Pampanga and Sasmuan-Lubao Road.

“Those are the two major roads affected by the earthquake. There are
three bridges that have been damaged but as of today (Tuesday), these
are now passable to light vehicles,” he added.

“There is significant damage on the Porac Church because the structure
is already old and it is not designed to withstand a major seismic
event. Damage assessment is ongoing. Up to now, the church remains
closed,” he said.

He added the repair of the bridge approach will start on Tuesday and
is expected to open within 24 hours.

“Quick response teams have been activated throughout Region 3, NCR,
and Region 4-A to assess the structural integrity of key infrastructure in the earthquake-affected area. As of noon, three road sections are closed to all types of vehicles in Region 3 due to the damaged bridge, cracks, collapsed slope protection and scouring. This includes (1) East Lateral Mega Dike, (2) Floridablanca-Consuelo Bridge, and (3) Sasmuan-Lubao Road,” he added.

Villar said they are ready to help local governments in addressing concerns on public infrastructures.

He added that inspection teams are currently doing assessments on structures in areas affected by the tremor. (PNA)

Politiko would love to hear your views on this...
Spread the love
Tags: Chuzon Supermarket, Consuelo Bridge, Department of Public Works and Highways (DPWH), Mark Villar, Pampanga, Porac Church, Sasmuan-Lubao Road
Disclaimer:
The comments posted on this site do not necessarily represent or reflect the views of management and owner of POLITICS.com.ph. We reserve the right to exclude comments that we deem to be inconsistent with our editorial standards.