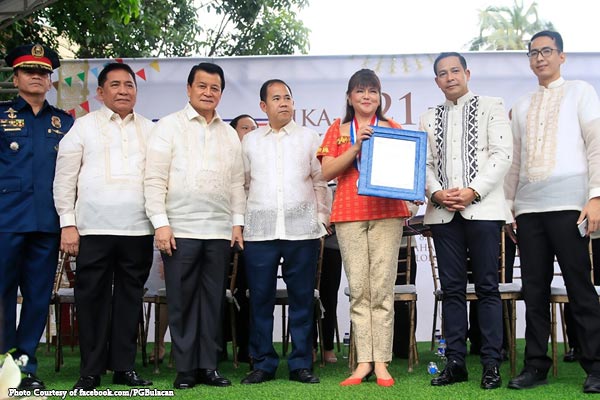 Marcos, who served as guest of honor during the commemoration of the 121st anniversary of the Malolos Congress held at the historic Barasoain Church in this city, said similar to the 100-percent support given by the members of the Malolos Congress to the ratification of the first Constitution, Filipinos must have broader and deeper ties to realize national development efforts.

“It is not our responsibility to achieve immediate success but it is our duty to fight for our beloved country and for our Filipino people. We must unite for our country’s prosperity,” the lady senator said.

She said Bulakenyos should be proud for the province for being the “cradle of the great history” of the country.

“Right here in Barasoain held the first national convention to draft the Constitution, our first Constitution that sought freedom for our country. It is also here in Malolos that the Declaration of Independence is being ratified. So, we enjoy our freedom now,” Marcos said.

Governor Daniel Fernando encouraged thousands of Bulakenyos in attendance despite the pouring rain to value the freedom that they are enjoying, and not use it to step on other people’s rights.

“Let’s not forget the true meaning of freedom. This is the legacy of the first Congress and it is also the kind of community we want to achieve in the province of Bulacan in our modern-day, the same community our ancestors dreamed of,” the governor said.

Marcos, together with Fernando, Vice Governor Wilhelmino Sy-Alvarado, and National Historical Commission of the Philippines (NHCP) chairman Rene Escalante, led the wreath-laying ceremony at the monument of President Emilio Aguinaldo in front of the Barasoain church.

The Malolos Congress, also known as the “National Assembly” of
representatives, was the constituent assembly of the First Philippine
Republic. It was convened at the Barasoain Church on September 15,
1898 where the Malolos Constitution was drafted. (PNA)

Politiko would love to hear your views on this...
Spread the love
Tags: Barasoain Church, Bulacan, Col. Joel Napoleon Coronel, Liga ng mga Bayan, Malolos Congress, Mayor Alfredo Germar, Mayor Gilbert Gatchalian, National Historical Commission of the Philippines, Pilipinas, Sangguniang Panlalawigan ng Bulacan, Senator Imee Marcos, Vice Governor Wilhelmino Sy-Alvarado
Disclaimer:
The comments posted on this site do not necessarily represent or reflect the views of management and owner of POLITICS.com.ph. We reserve the right to exclude comments that we deem to be inconsistent with our editorial standards.