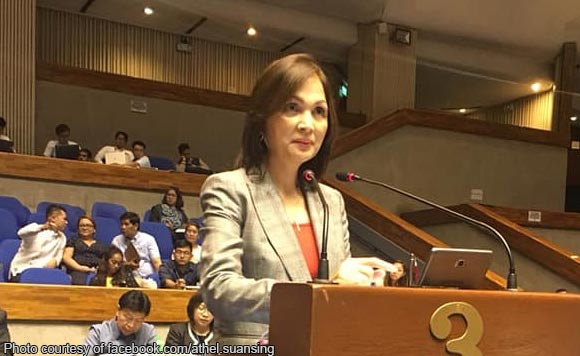 A committee in the House of Representatives chaired by Nueva Ecija 1st District Rep. Estrellita Suansing has approved the creation of a technical working group for the consolidation of bills that seek to criminalize the dumping of sewage sludge and industrial waste into to the sea.

According to a statement issued Sunday by the House of Representatives, Rep. Maximo Rodriguez, Jr. of Cagayan de Oro City will serve as TWG head for the consolidation of House Bill 4347 authored by House Speaker Gloria Macapagal-Arroyo, HB 857 by Deputy Speaker Linabelle Ruth Villarica, HB 6856 by Rodriguez, and HB 773 by former Rep. Emmelina Aglipay-Villar.

Suansing, who sponsored Arroyo’s HB 4347 at the committee’s recent hearing as the Pampanga 2nd District Representative was absent, recommended the designation of Rodriguez.

In her speech at the hearing, Suansing said Arroyo’s proposed legislation is vital in the protection of the country’s marine ecosystems, which is one of the richest in the world.

“We are home to many renowned marine sanctuaries, such as the Tubbataha Reef, the Apo Reef and the Balicasag Reef,” Suansing noted.

The four bills specifically prohibit the dumping into seawaters or transport for the purpose of dumping into sea water sewage sludge or industrial waste, unless said person has obtained a permit issued by the Secretary of Environment and Natural Resources.

Arroyo and Villarica’s bills want violators to be fined with not less than P100,000 or be imprisoned for not less than six months, or both, upon the discretion of the court.

The bills of Rodriguez and Aglipay-Villar, on the other hand, propose a penalty of P50,000 fine or imprisonment for three months to six years, or both, depending on the court’s discretion.

Politiko would love to hear your views on this...
Spread the love
Tags: Estrellita Suansing, Nueva Ecija, waste disposal
Disclaimer:
The comments posted on this site do not necessarily represent or reflect the views of management and owner of POLITICS.com.ph. We reserve the right to exclude comments that we deem to be inconsistent with our editorial standards.