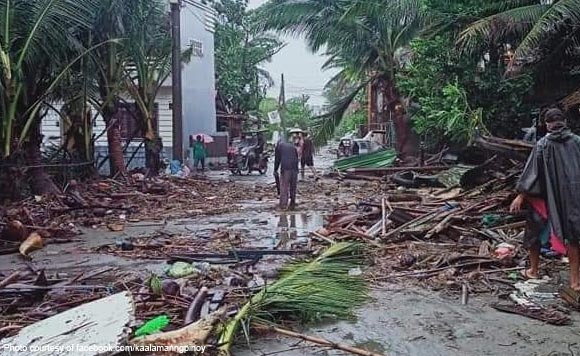 BALER, Aurora – The province was placed under a state of calamity on Saturday following the onslaught of Typhoon Ulysses.

In a special session of the Sangguniang Panlalawigan, a resolution declaring the province of Aurora under the state of calamity due to extensive damage brought by the typhoon was passed and approved.

The resolution authorizes the provincial government for the utilization of local disaster risk reduction and management (LDRRM) fund for relief and recovery programs.

On Friday, the town of Dingalan was also put under state of calamity as “Ulysses” destroyed houses and means of livelihood of fishermen and farmers in the area.

The intense rains and strong winds brought by “Ulysses” damaged agriculture and infrastructures and displaced thousands of residents in the province.

A total of 7,051 families or 22,219 persons from 98 barangays were pre-emptively evacuated and brought to different evacuation centers.

On the other hand, a total of 414 houses were damaged.

Of this number, 119 were totally destroyed while 414 were partially damaged.

Damage to infrastructures, on the other hand, was estimated at PHP34.17 million.

In agriculture, the estimated damage was pegged at PHP191.63 million.

The fisheries sector was severely hit with estimated losses amounted to PHP112.29 million, followed by crops with PHP79.06 million, and livestock at PHP277,600.

Amado Elson Egargue, Provincial Disaster Risk Reduction and Management Office chief, said in an interview, there were no casualties reported.

Egargue said for five years, there was no typhoon-related casualty in the province.

“We are thankful that we were able to maintain zero casualties as our target is to ensure the safety of the people. To save lives and to ensure the people’s safety is our priority. That is why we are doing all-out efforts before, present and after the typhoon,” he said. (PNA)

Politiko would love to hear your views on this...
Post Views: 26
Spread the love
Tags: Aurora, Baler, Typhoon Ulysses
Disclaimer:
The comments posted on this site do not necessarily represent or reflect the views of management and owner of POLITICS.com.ph. We reserve the right to exclude comments that we deem to be inconsistent with our editorial standards.