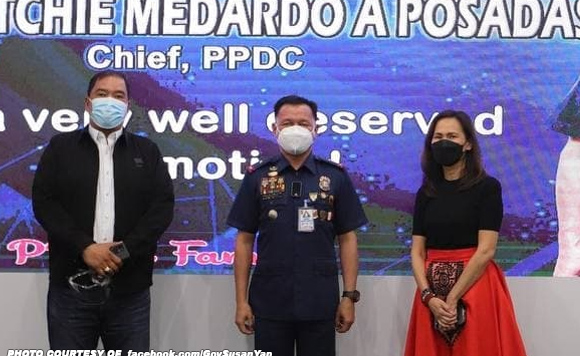 Tarlac Governor Susan Yap is nothing but thankful.

He took to Facebook to congratulate Tarlac’s former Police Provincial Director Ritchie Posadas for his promotion to Brigadier General. In his two-year service for Tarlac, Governor Yap could confidently attest to his reliable and trustworthy service for the people.

Aside from the now Brigadier General Posadas, other police officers were also promoted to higher positions.

Politiko would love to hear your views on this...
Spread the love
Tags: Director Ritchie Posadas, Governor Susan Yap, Tarlac City
Disclaimer:
The comments posted on this site do not necessarily represent or reflect the views of management and owner of POLITICS.com.ph. We reserve the right to exclude comments that we deem to be inconsistent with our editorial standards.