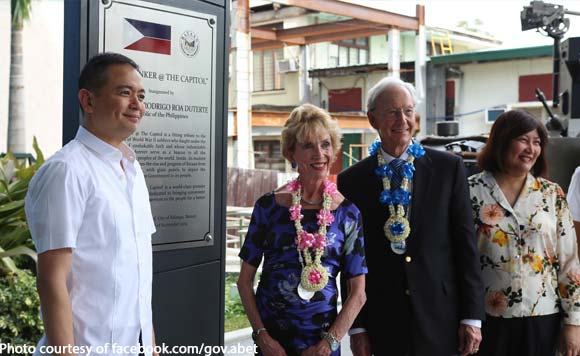 Bataan has some special visitors this week.

Governor Abet Garcia and Vice Governor Cris Garcia personally welcomed the VIP guests, Jean and husband Donald Wolf. Jean is the daughter of one of the American soldiers stationed in the Philippines back in World War II. This year, she decided to visit her father’s war zone because she is writing a book on her father’s WWII experiences.

Governor Garcia took her and Donald inside The Bunker building which was designed to serve as a tribute to veterans, of the war. He also gave them glass tokens as a sign of appreciation.

Politiko would love to hear your views on this...
Spread the love
Tags: American soldiers, Governor Abet Garcia, Jean, Vice Governor Cris Garcia, VIP guests
Disclaimer:
The comments posted on this site do not necessarily represent or reflect the views of management and owner of POLITICS.com.ph. We reserve the right to exclude comments that we deem to be inconsistent with our editorial standards.