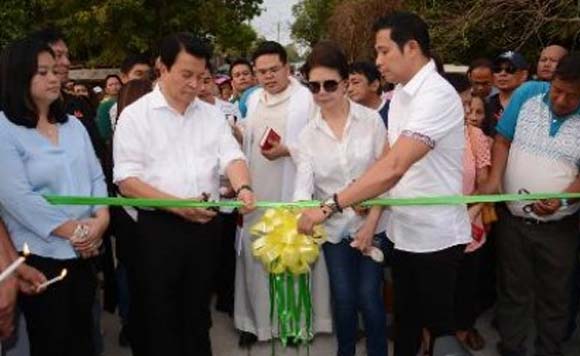 CITY OF SAN JOSE DEL MONTE, Bulacan — A newly-reconstructed bridge in this city was formally opened on Monday after a year-long closure.

The PHP29-million reconstructed bridge will benefit commuters and motorists going to Barangay Poblacion as it will shorten travel time compared to when it was not yet passable.

Alvarado reminded the residents to take care of the bridge so that the next generation of Bulakenyos could benefit from it as well.

“At the time it was made in 1970, there was no retrofitting technology so the life span of this bridge was even 70 years old. It was completely replaced, and its passing was heavy. This time, it is strong and it will take more than 70 years,” the governor said.

Fernando shared Alvarado’s view, noting that the bridge would be a contributing factor to the success of the city and the province.

According to Glenn Reyes, head of the Provincial Engineer’s Office, the 49-year-old bridge was closed for a year and was reconstructed in five months’ time.

Daisy Tongol, a resident of this city, is happy that the bridge is now open as everything will return to normal for them.

“Madali na kasing lumabas-pasok samin ngayon dito. Hindi na iikot pa ng malayo. Wala nang hassle kasi ‘di na kakain ng maraming oras (It would be easier for us to get in and out of here now. We will no longer need to take a longer route. There is no more hassle as time will not be wasted),” she said.

Emma Sanz, also a resident here, expressed her gratitude to the provincial government of Bulacan for the completion of the bridge’s repair.

“Nagpapasalamat kami at malaking kaginhawahan ito sa amin. Wala nang masisirang sasakyan kasi sa hirap ng iniikot ng mga sasakyan talagang masisira. Wala nang magrereklamo, kasi ito ang pinakamadaling daan (We are thankful and it is a big convenience for us. Vehicles will no longer be worn out easily. No one would complain anymore because this is the easiest route),” Sanz said.

Politiko would love to hear your views on this...
Spread the love
Tags: 29-million, Barangay Dulong Bayan, Glenn Reyes, Governor Wilhelmino M. Sy-Alvarado, Vice Governor Daniel R. Fernando
Disclaimer:
The comments posted on this site do not necessarily represent or reflect the views of management and owner of POLITICS.com.ph. We reserve the right to exclude comments that we deem to be inconsistent with our editorial standards.