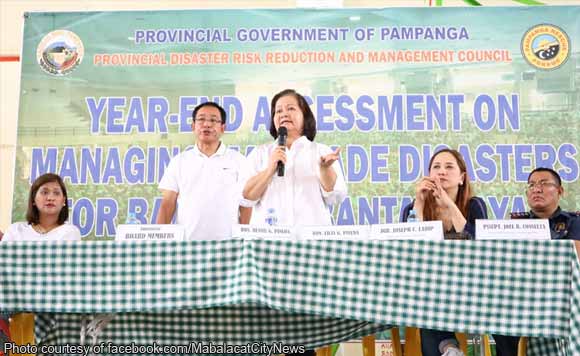 Pampanga Governor Lilia Pineda, together with Vice Gov. Dennis Pineda, recently cited the efforts of Bantay Bayan members in curbing illegal drugs and reducing the crime rate in the province.

“With your help, Pampanga is now one of the peaceful provinces in Central Luzon,” Pineda told more than 5,000 Bantay Bayan members of the province’s second and third districts during the Year-End Assessment on Managing Man-Made Disasters held separately at the Lubao Gymnasium and Bren Z. Guiao Convention Center.

There are 2,796 Bantay Bayan members in Pampanga’s second district, while 2,883 are in service in the third district.

The governor also provided special citation to 66 Bantay Bayan members who are aged 70 and above, for their continued service despite their age.

The senior Bantay Bayan members received P2,000 each, or a total of P132,000 from the
provincial government.

Politiko would love to hear your views on this...
Spread the love
Tags: Bantay Bayan members, Bren Z. Guiao Convention Center, Central Luzon, Governor Lilia Pineda, Managing Man-Made Disasters, mpanga, Year-End Assessment
Disclaimer:
The comments posted on this site do not necessarily represent or reflect the views of management and owner of POLITICS.com.ph. We reserve the right to exclude comments that we deem to be inconsistent with our editorial standards.