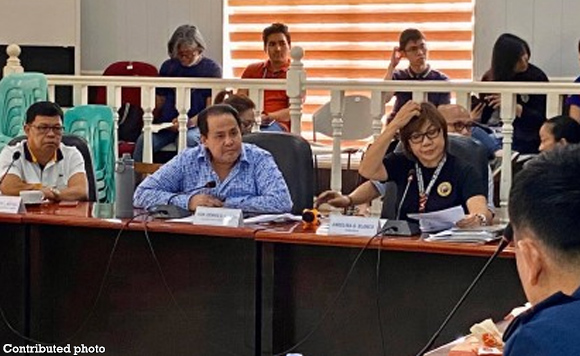 CITY OF SAN FERNANDO, Pampanga — Governor Dennis Pineda said on Wednesday that this province will not be declared under lockdown amid three confirmed cases of the coronavirus disease 2019 (Covid-19) in Central Luzon.

The confirmed cases are the two repatriates quarantined at New Clark City (NCC) in Capas, Tarlac while the other one is from the City of San Jose del Monte in Bulacan.

“Definitely, the provincial government will not order a lockdown, as the province is not yet at a worse situation,” Pineda said during an interview after an emergency meeting on Covid-19 at the Sangguniang Panlalawigan Hall here.

He said the recommendation for a lockdown would come from the Department of Health (DOH), and would be decided by President Rodrigo Duterte.

The governor appealed to Kapampangans not to panic as the provincial government is implementing preventive measures against the viral infection.

“Pampanga is ready to handle this situation kaya wag ho kayo matakot basta magtulungan po tayo (do not be afraid. Let’s help each other),” Pineda said.

On the suspension of classes, the governor said he will not issue any order as classes will be closing in two weeks.

He, however, advised parents to keep their children out of public places when classes are suspended.

“Sa mga parents, kung may lagnat o masama na po ang pakiramdam ng mga bata huwag na po papasukin. In 10 days closing na po ng klase at ang DepEd (Department of Education) po magpapatupad na ng precautionary measures (To the parents, do not allow your children to come to school if they are not feeling well or have fever. In 10 days, classes will be closed and the DepEd will implement precautionary measures),” he said.

Meanwhile, Blanco said the PDRRMC has allocated PHP10 million for the prevention and preparedness against Covid-19.

“We can spend as much as PHP10 million in any emergency situation,” she said.