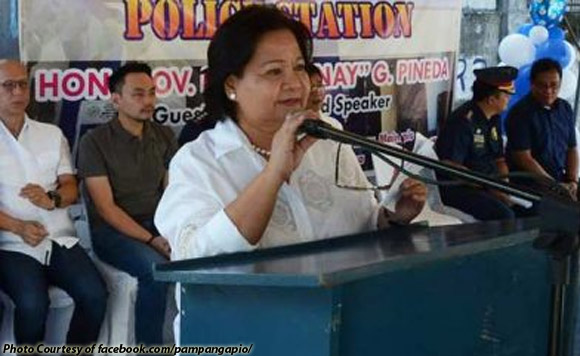 Pampanga Governor Lilia Pineda on Monday (June 12) honored a Kapampangan member of the Philippine Marines who was killed during the clashes between government forces and local terrorists in Marawi City.

The Pampanga politiko visited the wake of 1Lt John Frederick Savellano, 29, one of the 13 Marines killed in Marawi City last week.

Savellano led the team that recovered more than P70 million in cash and checks from the Maute group in Marawi City.

The remains of Savellano will be interred on Saturday (June 17).

Politiko would love to hear your views on this...
Post Views: 0
Spread the love
Tags: Marawi City, Pampanga Governor Lilia Pineda
Disclaimer:
The comments posted on this site do not necessarily represent or reflect the views of management and owner of POLITICS.com.ph. We reserve the right to exclude comments that we deem to be inconsistent with our editorial standards.