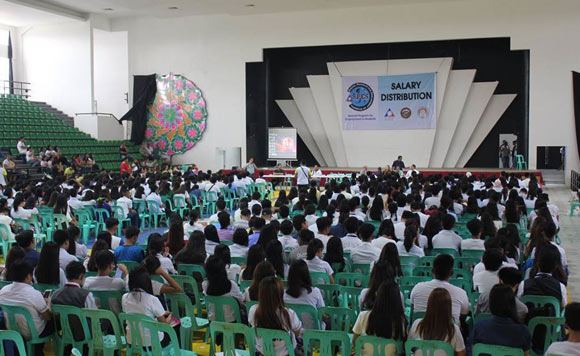 Pampanga Governor Lilia Pineda has distributed salaries to 927 high school students in the province under the Special Program for the Employment of Students (SPES).

Each student received P 9,495 for working for 20 days in various government offices where they earned P 453.68 per day.

“Your salaries are of big help in your studies. So study hard and never waver for the Provincial Government’s support will continue as long as you do your part,” Pineda said.

SPES is a program being implemented by the Provincial Government of Pampanga through its Provincial Employment Services Office (PESO) and Department of Labor and Employment (DOLE).

The Provincial Government allocated a total of 9,495 slots with total funding of P 51,692,300.00 and will complete its year-round SPES implementation this October 2018.

Politiko would love to hear your views on this...
Post Views: 0
Spread the love
Tags: Bren Z. Guiao Convention Center, Department of Labor and Employment (DOLE), Government offices, Governor Lilia Pineda, Pampanga, Provincial Employment Services Office (PESO), Special Program for the Employment of Students (SPES)
Disclaimer:
The comments posted on this site do not necessarily represent or reflect the views of management and owner of POLITICS.com.ph. We reserve the right to exclude comments that we deem to be inconsistent with our editorial standards.