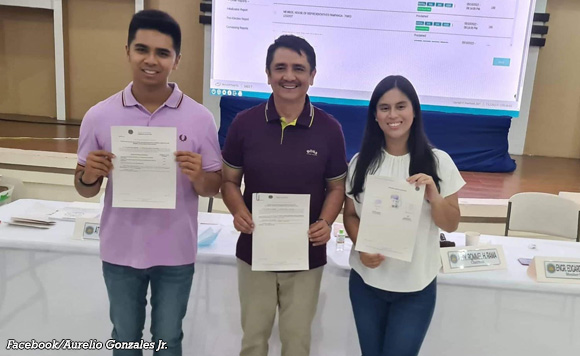 The Pampanga canvassing board has proclaimed Rep. Aurelio Gonzales Jr. and his two children as winners in the May 9 elections in the province.

Gonzales, who had no opponent, got 280,375 votes. It will be his third and last term as representative of Pampanga’s third district in the incoming 19th Congress. He served two terms in previous Congresses, from 2007 to 2013.

He thanked his constituents “for their vote of confidence and trust in us and for giving us an overwhelming mandate.”

His daughter Mica was elected No. 1 provincial board member representing the third district, with 227,603 votes; while his son Brenz, a civil engineer like him, was voted No. 1 councilor in the capital city of San Fernando with 82,006 votes.

Gonzales has vowed to pursue his Charter change advocacy in the incoming 19th Congress.

He is proposing a five-year term for the President and Vice President with one reelection for a total tenure of 10 years, instead of the present six years without reelection.

Politiko would love to hear your views on this...
Spread the love
Tags: Aurelio Gonzales Jr., May 9 elections, Pampanga
Disclaimer:
The comments posted on this site do not necessarily represent or reflect the views of management and owner of POLITICS.com.ph. We reserve the right to exclude comments that we deem to be inconsistent with our editorial standards.