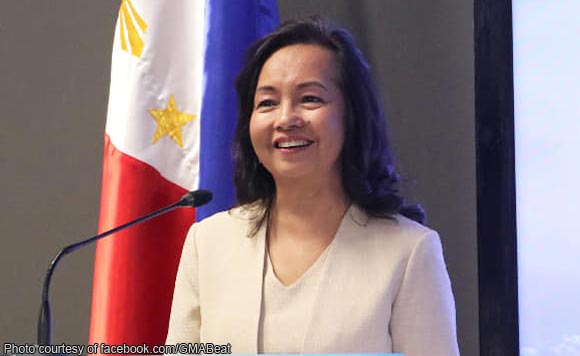 CLARK FREEPORT, Pampanga — A monument of the late President Diosdado Macapagal will soon be erected inside this freeport.

Former President and now Speaker of the House of Representatives Gloria Macapagal-Arroyo on Tuesday led the groundbreaking ceremony for the construction of the monument in honor of her father.

The proposed monument for Macapagal will have a total height of 20 feet with a 10-foot pedestal and 10-foot full-body statue.

The artistic style, height, and overall design of the monument is based on the National Historical Commission of the Philippines (NHCP) guidelines on monuments honoring national heroes, illustrious Filipinos and other personages.

Likewise, a road marker dedicated to the late President Macapagal was unveiled.

The NAIA Gateway that was renamed as Diosdado Macapagal Highway has a length of 2.36 kilometers and connects Manuel A. Roxas Highway to the Clark South interchange of the Subic-Clark-Tarlac Expressway (SCTEx).

It also traverses the main road inside the Clark Global City.

From its current four-lane course, the highway will also undergo expansion next year in anticipation of a bigger traffic volume.

During the event, Arroyo was also presented with a replica of the D.P. Macapagal Highway road sign by Global Gateway Development Corporation (GGDC) vice chairman and president Wilfredo Placino with lawyer Deo Custodio of Udenna Corporation, which operates the Clark Global City.

Gracing the occasion were officials of Pampanga and Tarlac provinces led by Governors Lilia Pineda and Susan Yap, Representatives Carmelo Lazatin II of 1st District, Aurelio Gonzales of 3rd District, both of Pampanga, and Victor Yap of the 2nd District of Tarlac. (PNA)

Politiko would love to hear your views on this...
Spread the love
Tags: 1st District, and Bases Conversion, Aurelio Gonzales, BCDA president Vivencio B. Dizon, CDC chairman Jose P. De Jesus, Governors Lilia Pineda, House of Representatives Gloria Macapagal-Arroyo, president Noel F. Manankil, Representatives Carmelo Lazatin II, SCTEX, Susan Yap, Victor Yap
Disclaimer:
The comments posted on this site do not necessarily represent or reflect the views of management and owner of POLITICS.com.ph. We reserve the right to exclude comments that we deem to be inconsistent with our editorial standards.