GMA goes on ‘sentimental journey’ to visit her old projects 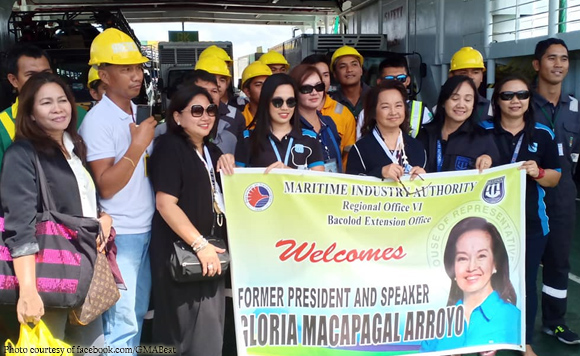 BACOLOD CITY — House of Representatives Speaker Gloria Macapagal-Arroyo visited the Bacolod-Silay Airport in Negros Occidental during the 18th anniversary of its operations on Friday as part of her “sentimental journey” to her favorite projects in the country.

“Happy anniversary to all of us. I like to say all of us because I’m proud to have been a part of the history of this airport,” the former president said in her message during the morning program.

As then chief executive, Arroyo led the inauguration of the Bacolod-Silay Airport on July 13, 2007 ahead of its formal opening as an airport of international standards on January 18, 2008.

Arroyo, who came with her sister-in-law Marilou Arroyo-Lesaca, whom she described as a presumptive congresswoman for running unopposed as representative of the 5th District, was joined by Governor Alfredo Marañon Jr., Silay City Mayor Mark Golez, Abang Lingkod partylist Rep. Stephen Paduano, and Civil Aviation Authority of the Philippines Director General Jim Sydiongco during the program.

The House Speaker said she did not actually know there will be a celebration and she visited without knowing about the event.

“I’m already going to leave public office on June 30, and I told my staff, ‘You know, I want to make a sentimental journey to my favorite projects in the Philippines, and among them is the Bacolod-Silay Airport. That’s why I decided to come today,” she said.

“Since there’s no event in Congress or in Metro Manila, I said. ‘Let’s go to Silay. Let us look at how it is doing now, only to find out that today is your anniversary. So, the Lord wanted me to be part of this anniversary,” she added.

Arroyo recalled the resistance of some sectors to the transfer of the airport from Bacolod to Silay, but she noted the opening of the new airport has brought so much benefits to the province, particularly on tourism.

“Congratulations, for being the second most-visited by domestic tourists,” she said of Negros Occidental, adding that the province has also become attractive to more foreign visitors and investors.

After visiting the Bacolod-Silay Airport and passing through the 10-km. airport access road, the House Speaker proceeded to the Bredco port in Bacolod to take the Bacolod-Dumangas route going to Iloilo on board a roll on/roll-off (RoRo) vessel.

“From here, we will be going on another sentimental journey, to take the RoRo, which was also our project,” she said.

The Bacolod-Dumangas route started in 2005 as part of Arroyo’s “Strong Republic Nautical Highway” program to ensure fast and economical movement of goods and people, and to boost domestic tourism and trade.

“That will be another sentimental journey because to me, the most important infrastructures in the Visayas are roads, airports, and RoRo (ports),” she added. (PNA)

Politiko would love to hear your views on this...
Spread the love
Tags: Bacolod City, Bacolod-Silay Airport, Marilou Arroyo-Lesaca, Mayor Mark Golez, Speaker Gloria Macapagal-Arroyo
Disclaimer:
The comments posted on this site do not necessarily represent or reflect the views of management and owner of POLITICS.com.ph. We reserve the right to exclude comments that we deem to be inconsistent with our editorial standards.