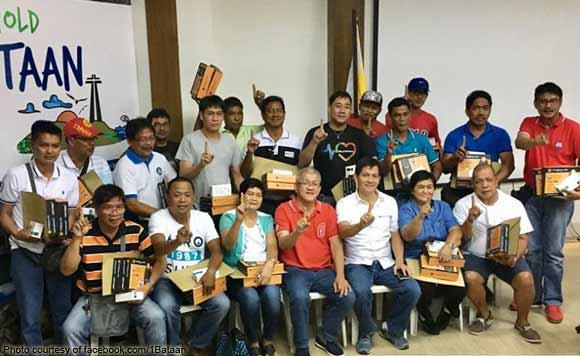 Bataan 2nd District Representative Joet Garcia on August 5 led the distribution of communication equipment to all 237 barangay captains of the province for the I-Patroller project.

The Bataan politiko said the smartphones with postpaid lines were provided by the provincial government while the two-way radios were funded by his office and the office of 1st District Representative Geraldine Roman.

Each barangay captain received one smartphone and two sets of two-way radios.

“These will be used for our province’s I-Patroller project using Viber application in reporting and addressing law violations and other problems in different villages in the province. The radios will be connected to our 1Bataan Command Center,” Garcia said.

The I-Patroller project tasks the police and barangay tanods to take photos of violations in barangays.

“Once, the pictures are taken, these will be uploaded to the closed group who will act immediately to resolve the problem. This is also be an effective tool in addressing emergencies,” Garcia said.

Politiko would love to hear your views on this...
Post Views: 0
Spread the love
Tags: Bataan, I-Patroller project, Representative Joet Garcia
Disclaimer:
The comments posted on this site do not necessarily represent or reflect the views of management and owner of POLITICS.com.ph. We reserve the right to exclude comments that we deem to be inconsistent with our editorial standards.