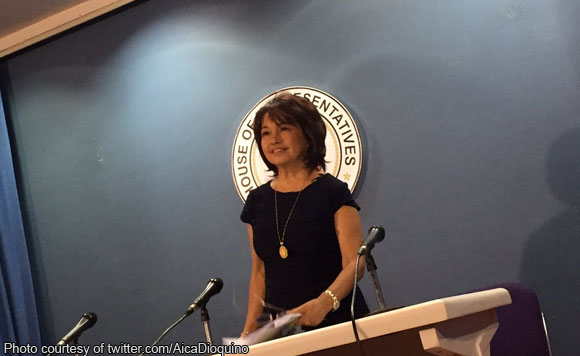 The politiko sported a new hairstyle during a press conference she called at the House of Representatives on Thursday, April 20 on the West Philippine Sea (South China Sea) dispute. Joining here were her former executive secretary Eduardo Ermita and lawyer Estelito Mendoza.

During the press conference, Arroyo placed her trust in President Rodrigo Duterte in handling the ongoing sea row.

“I don’t know all the facts that are available to the current administration, so I do not dare to make any recommendations. And I keep that attitude because of my own experience as president,” the former president said.

“There were so many other people in the peanut gallery telling me what to do and they did not have all the facts at their disposal. So as far as I’m concerned, President Duterte knows what he’s doing and I do not have any recommendations to make,” Arroyo said.

Politiko would love to hear your views on this...
Spread the love
Tags: Eduardo Ermita, lawyer Estelito Mendoza, Pampanga 2nd District, president Rodrigo Duterte, Representative Gloria Macapagal-Arroyo
Disclaimer:
The comments posted on this site do not necessarily represent or reflect the views of management and owner of POLITICS.com.ph. We reserve the right to exclude comments that we deem to be inconsistent with our editorial standards.