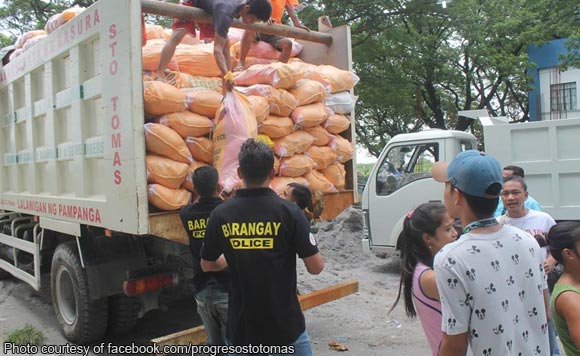 Residents of Sto. Tomas, Pampanga who suffered from flooding due to last week’s Southwest Monsoon rains were given relief goods on Thursday, the local government said on its Facebook account.

The relief operation was conducted in coordination with the provincial and municipal governments.

According to the latest report of the National Disaster Risk Reduction and Management Council, there were a total of 9,066 families or 36,204 individuals from seven barangays in Sto. Tomas who were affected by the monsoon rains.

Of those, 325 families or 1,385 individuals stayed in nine evacuation centers.

There were seven areas in Sto. Tomas that were identified to have been flooded due to the heavy rains and high tide.

So far, close to P1.8 million worth of assistance has been extended to the municipality, courtesy of the local government and the Department of Social Welfare and Development.

Politiko would love to hear your views on this...
Spread the love
Tags: Department of Social Welfare and Development, International Container Terminal Services Inc. Foundation, National Disaster Risk Reduction and Management Council, Pampanga, southwest monsoon, Sto. Tomas, Subic Bay International Terminal Corporation
Disclaimer:
The comments posted on this site do not necessarily represent or reflect the views of management and owner of POLITICS.com.ph. We reserve the right to exclude comments that we deem to be inconsistent with our editorial standards.