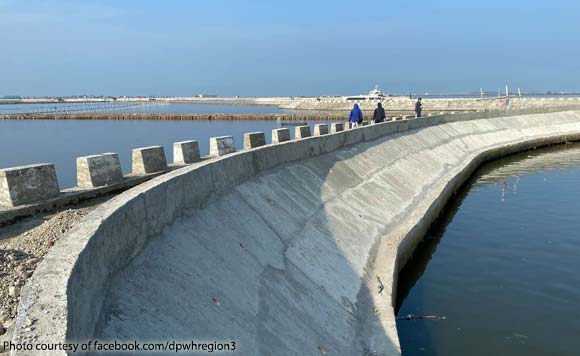 The second phase of Masukol Flood Control Structure in Paombong town in Bulacan province is now complete, according to the Department of Public Works and Highways (DPWH).

The project, finished last May, is seen to prevent major flooding in Paombong, particularly Barangay Masukol, a coastal village near Manila Bay, the DPWH said.

Masukol has a population of fewer than 1,400 people.

“During typhoon season and high tide, along with heavy rains, water coming from the Manila Bay scourges the houses and fishponds in Masukol and other neighboring coastal barangays of Paombong,” DPWH Regional Director Roseller Tolentino said in a Philippine Information Agency report.

“With the construction of the vital flood control structure, we can say that the residents and their livelihoods are now protected from the threats posed by extreme weather conditions,” he added.

The 2,705-lineal meter flood control project involves the construction of a concrete slope protection, grouted riprap on the opposite side, and reinforced concrete box culvert with flood gate in various key locations, the report said.

The first phase of the project was completed in 2019.

Politiko would love to hear your views on this...
Spread the love
Tags: flash floods, flood control projects, Paombong
Disclaimer:
The comments posted on this site do not necessarily represent or reflect the views of management and owner of POLITICS.com.ph. We reserve the right to exclude comments that we deem to be inconsistent with our editorial standards.