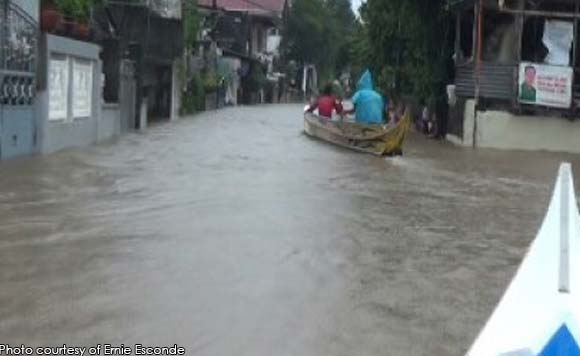 Under one to five-foot deep floodwaters were 11 barangays in Hermosa, five in Dinalupihan, three in Pilar, two in Abucay and one each in Balanga City, Orion and Morong.

On Sunday, the water already subsided in many areas except in Barangays Almacen, Daungan and Pulo in Hermosa that were still under three to five-foot flood.

Angel Ruiz of the office of Governor Albert Garcia said 40 families were brought to evacuation centers in Hermosa and Pilar on Saturday but returned to their home on Sunday.

Garcia, who chairs the Provincial Disaster Risk Reduction and Management Office, ordered the release of relief goods and the mobilization of all concerned agencies for rescue and relief operations.

PDRRMO placed at 7,650 the total number of families affected by the two-day flood.

Meanwhile, a steel bridge temporarily used as passageway by residents to cross the Sibacan River in Balanga City collapsed after debris clogged the waterway coupled with the onslaught of strong flood water. No one was hurt.

A new one is being built adjacent to the damaged bridge.

Ruiz said there was no recorded landslide or death during the flooding.

Both the MacArthur Highway and Roman Expressway were passable to all types of vehicles.

As of Sunday afternoon, the weather has improved although there are still intermittent light rain showers.
(PNA)

Politiko would love to hear your views on this...
Spread the love
Tags: Balanga City, Barangays Almacen, Bataan, Dinalupihan, flash floods, Provincial Disaster Risk Reduction and Management Office, three in Pilar, two in Abucay
Disclaimer:
The comments posted on this site do not necessarily represent or reflect the views of management and owner of POLITICS.com.ph. We reserve the right to exclude comments that we deem to be inconsistent with our editorial standards.