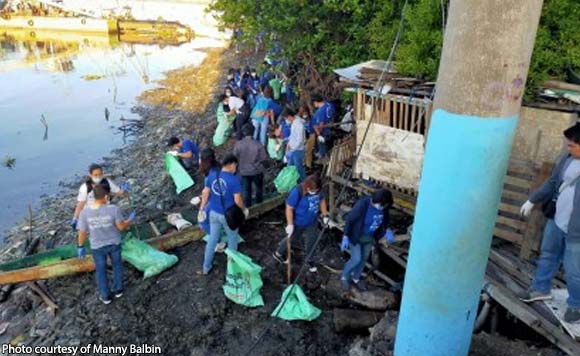 This was the assessment of the representatives of different government agencies led by the Department of Environment and Natural Resources (DENR) tasked to implement the mandamus of the Supreme Court to rehabilitate Manila Bay.

Paquito Moreno Jr., regional executive director of the DENR-Central Luzon, was among the guests during the first anniversary of the Battle for Manila Bay held at the Fish Port of Barangay Tawiran in this town on Sunday.

Moreno said it is imperative to save the seafloors as most of the fish will eventually die due to plastic pollution.

The Manila Bay clean-up activities in Central Luzon were simultaneously held on Sunday in this town, Barangay Consuelo in Macabebe, Pampanga; and at the Balanga Wetland and Nature Park in Balanga City, Bataan.

Since the launch of the Battle for Manila Bay last year, Moreno said a total of 1.6 million kilos of wastes in Central Luzon were gathered in 1,036 clean-up activities.

He said a swimmable area in Manila Bay was also declared in Aguawan Beach in Sisiman village in Mariveles, Bataan where the fecal coliform level based on DENR’s latest reading was at 21, most probable number (MPN) that is way below the standard level of 100 MPN.

“Many have doubted us and questioned our potentials to win this battle for Manila Bay but a year after this program has been launched, I believe we can all say we are winning this,” Moreno said.

Obando Mayor Edwin Santos said the clean-up activity of Manila Bay in Bulacan was launched in Barangay Tawiran in this town, and has shown a marked improvement in its river system that was included as one of the world’s dirtiest rivers.

Santos said before the Manila Bay rehabilitation program was launched, oyster farms together with other fish species in the town’s river system, were badly affected because of the pollution.

“One year after the Battle for Manila Bay was launched, oysters, together with other fish species, are now starting to survive and thrive in the Obando River system,” he said.

Santos said that before, marginalized fisherfolk in their town always complained that not enough fish were being caught in their municipal waters.

“But now fishermen have started to catch fish that are enough to feed their families,” he added.

Santos attributed this improvement to the residents’ awareness on proper waste disposal.

He said wastes were previously being dumped in the town’s waterways, forcing the local government unit to set up a garbage transfer station in Barangay Tawiran.

Santos said the town’s garbage transfer station is now being eyed to be converted into a material recovery facility, where the garbage will be segregated and transformed into recyclable materials.

Julie Daquioag, regional director of the Department of the Interior and Local Government (DILG), said their agency was tasked to regularly monitor the rehabilitation efforts for the Manila Bay cleanup activities.

She confirmed that the town of Obando has been “very compliant” with the program and that no show-cause orders were issued to its local government units.

Santos attributed the diminishing garbage dumping on the town’s river system to the strict implementation of local ordinances and national laws on garbage disposals.