Fish kills in Pampanga due to oxygen depletion 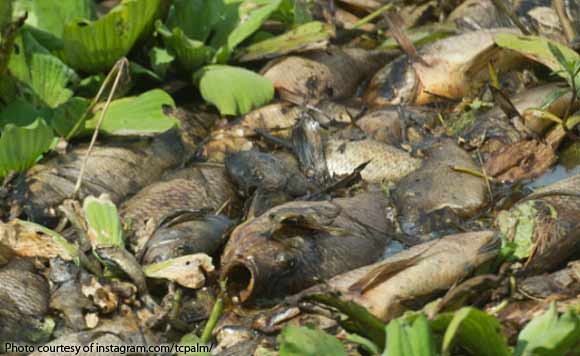 The Bureau of Fisheries and Aquatic Resources in Pampanga has confirmed that hyphoxia or oxygen depletion was the cause of the recent fish kills in the Pampanga River in Macabebe and Masantol towns.

Hyphoxia is normally caused by pollution or euthrophication or the shallowing of river due to sediments or organic matters coming from domestic and industrial runoffs, according to provincial fishery coordinator Lanie Lamyong,

Results of the water quality testing conducted by BFAR in five villages in Masantol revealed that dissolved oxygen level in the area ranges from 0.46 mg/li to 3.78 mg/li, which is below the 5 mg/li optimum level.

The report, however, does not acquit Far East Alcohol Corporation (Feaco) for accidentally causing a molasses leak in Pampanga River.

Feaco received a 30-day suspension of business permit from Apalit Mayor Peter Nucom after he discovered that the company has been discharging waste water into the river.

The local government discovered that 65 tons or 46,000 liters of molasses, a byproduct of sugar used in producing alcoholic beverages, leaked from Feaco’s three delivery tanks on Tuesday, Sept. 19 and may have caused the fish kills.

Feaco did not report the leaks to any government agency.

Lamyong said that molasses are considered organic matters which may cause oxygen depletion in the river system.

Politiko would love to hear your views on this...
Spread the love
Tags: Bureau of Fisheries and Aquatic Resources, Feaco, Macabebe, Masantol towns, Pampanga River
Disclaimer:
The comments posted on this site do not necessarily represent or reflect the views of management and owner of POLITICS.com.ph. We reserve the right to exclude comments that we deem to be inconsistent with our editorial standards.