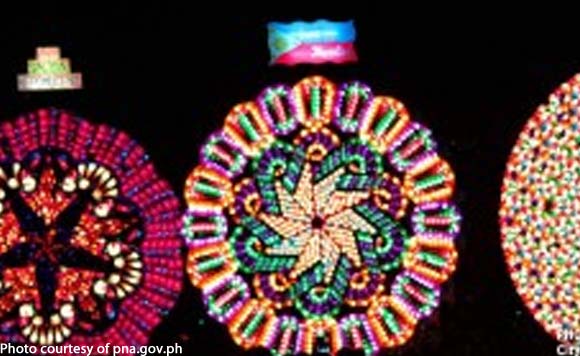 CITY OF SAN FERNANDO, Pampanga — Giant and brightly-colored lanterns lit up the dark and cold skies as the traditional “Ligligan Parul” (Giant Lantern Festival) was held Saturday at the Robinsons Starmills here.

The annual festival, which earned for Pampanga the title “Home of Giant Lanterns” and the distinction as the “Christmas Capital of the Philippines,” was participated in by 12 villages in this city.

Lantern makers here have taken the traditional art of parol-making into a higher level, making this city famous worldwide.

They were all eyes as the grand display of spectacular lights, interplay of colors and kaleidoscopic patterns of the giant lanterns filled up the skies to the beat of Christmas songs and other lively music.

The Giant Lantern Festival is one of the grandest events in the province during the Yuletide season and thousands of foreign and local visitors flock here to witness the annual competition.

“This is really amazing. No one can dispute that this is the best festival in the region. It brings the warmth and joys of Christmas,” 54-year-old Greg Santillan from Balanga City, Bataan said.

Theresa de la Peña, a “balikbayan” or vacationer from Winnipeg, Canada said: “The air may not be crisp and cool as it would have been in countries that epitomize white Christmases but here in the Philippines it is really different. You can feel the true spirit of Christmas especially in a festival like this.”

Helen del Carmen, an overseas Filipino worker from the Dubai, United Arab Emirates, said “this is my first time to watch this Giant Lantern Festival and it is really different. I do miss Filipino Christmas traditions such as this.”

“My friends and I traveled all the way from Sta. Rosa, Laguna and it is really exciting to see those huge brightly-colored lanterns. Those are all nice and beautiful,” Jerry Fernandez said.

“The Giant Lantern Festival has been around for years, but I can still feel the burst of excitement every time I see each lantern designed with intricate and unique patterns that you can only find in this province,” Lauro Pestano from nearby Arayat town said.

After the presentation, one lantern stood out as the “best among the best” of the 12 entries.

After the competition, the giant lanterns will still be on display at the Robinsons Starmills Pampanga on December 15, 21 and 26.

They will also be put on exhibit in Barangay Telabastagan here on Dec. 22; Greenfields Subdivision in Barangay Sindalan on Dec. 23 and at the Poblacion on Dec. 24. (PNA)