Ex-Sen. Angara back in Baler; to be laid to rest on Tuesday 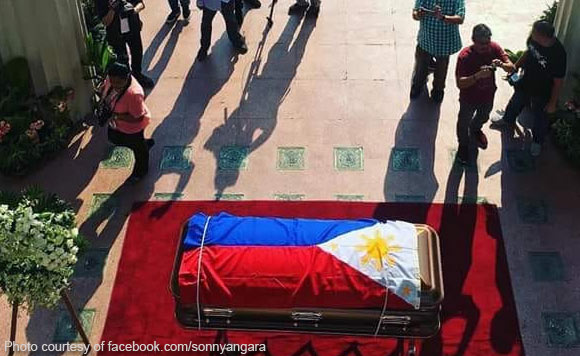 Residents of Baler, Aurora has until Tuesday to pay their last respects to late Senator Edgardo Angara.

The remains of the 83-year old former lawmaker were brought back to his hometown on Saturday, May 19, when public viewing also began.

According to Senator Sonny Angara, the interment of his father in the province will be on Tuesday, May 22.

Members of the Aurora Hotel Resort Restaurant Owners’ Association who were among those who waited for the arrival of Angara’s remains Saturday at the Baler airport extended their condolences to the family of the late official.

The group considered Angara as the “Father of Tourism in Aurora.”

Angara passed away on May 13 after an apparent heart attack.

Politiko would love to hear your views on this...
Spread the love
Tags: Aurora, Aurora Hotel Resort Restaurant Owners' Association, Baler, Ex-Sen. Angara, late Senator Edgardo Angara
Disclaimer:
The comments posted on this site do not necessarily represent or reflect the views of management and owner of POLITICS.com.ph. We reserve the right to exclude comments that we deem to be inconsistent with our editorial standards.