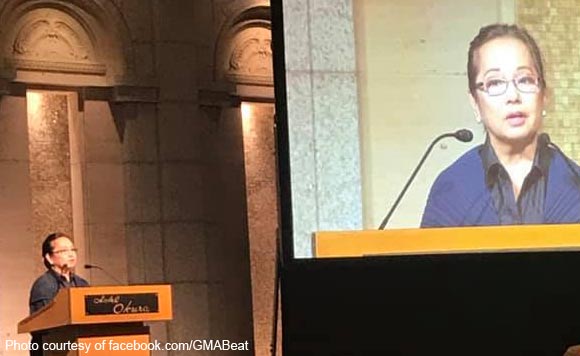 Arroyo shared how democracy works in the Philippines during her attendance at the International Symposium with the theme “Shared Values and Democracy in Asia” in Tokyo, Japan on July 5.

But she said that the practice of Philippine democracy might be different from other countries.

“The Philippines is a functioning democracy, but in the practice of it, it probably has many differences from the practice of democracy elsewhere, whether in the West or in the East,” she said.

“Those differences arise from the unique culture, history, and temperament of the Filipino people, and therefore they represent the collective choice of our people as of this point in time,” the former president added.

While she expressed belief in democracy in its purest sense, Arroyo, however, raised doubt that there is a perfect democracy anywhere in the world today.

She also urged other countries not to impose their own standard of democracy to others.

” I would only urge that no country blindly impose its own standards on any other country, because each democratic country has arrived at its time and place in the evolution of its civil institutions based on the democratic choice of its people,” Arroyo stressed.

Politiko would love to hear your views on this...
Post Views: 0
Spread the love
Tags: Ex-pres. Arroyo, International Symposium, Pampanga Representative, Philippines, Representative Gloria Macapagal-Arroyo
Disclaimer:
The comments posted on this site do not necessarily represent or reflect the views of management and owner of POLITICS.com.ph. We reserve the right to exclude comments that we deem to be inconsistent with our editorial standards.