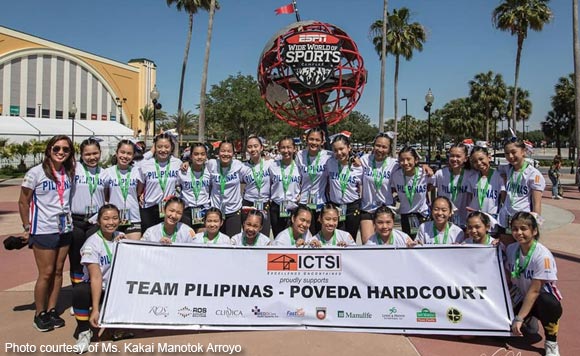 Her granddaughter, Evie Arroyo, was part of the Philippine delegation to the 2018 World Cheerleading Championships held in Orlando, Florida late last month.

Evie, 14, is the daughter of Arroyo’s youngest son, Dato, who is married to Kakai Manotok.

“Congratulations to the Philippine delegation to the 2018 World Cheerleading Championships held recently in Orlando, Florida,” Arroyo said on her Facebook page.

Evie was the co-team captain of the Poveda Juniors Team, which competed for the Junior Championships.

“We are proud of you,” Arroyo said.

Politiko would love to hear your views on this...
Spread the love
Tags: 2018 World Cheerleading Championships, Evie, Evie Arroyo, Former president, Junior Championships, Orlando, Pampanga Representative Gloria Macapagal-Arroyo, Poveda Juniors Team, proud lola
Disclaimer:
The comments posted on this site do not necessarily represent or reflect the views of management and owner of POLITICS.com.ph. We reserve the right to exclude comments that we deem to be inconsistent with our editorial standards.