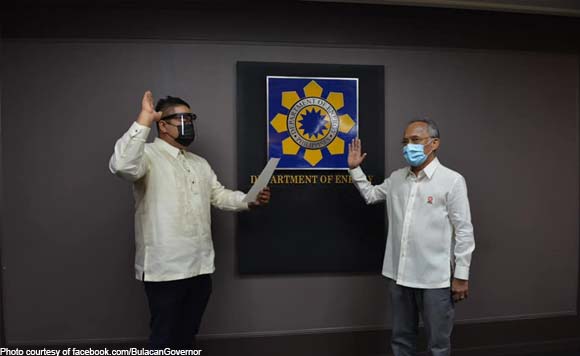 Former Malolos, Bulacan mayor Christian Natividad has vowed to go “all out” against movie pirates and counterfeiters upon taking the helm of the Optical Media Board (OMB).

The former three-term mayor took his oath of office before Energy Secretary Alfonso Cusi on October 1.

Besides the chairmanship, Natividad concurrently holds the position of OMB CEO and member representing the academe, according to his appointment papers.

During his term, Malolos City was a consistent awardee for Seal of Good Housekeeping and for peace and order and was considered to be one of the safest cities in the Philippines, the PNA report said.

Politiko would love to hear your views on this...
Spread the love
Tags: Bulacan, Ex-Malolos, Former Malolos, Mayor Christian Natividad, Mayor Natividad, Optical Media Board
Disclaimer:
The comments posted on this site do not necessarily represent or reflect the views of management and owner of POLITICS.com.ph. We reserve the right to exclude comments that we deem to be inconsistent with our editorial standards.