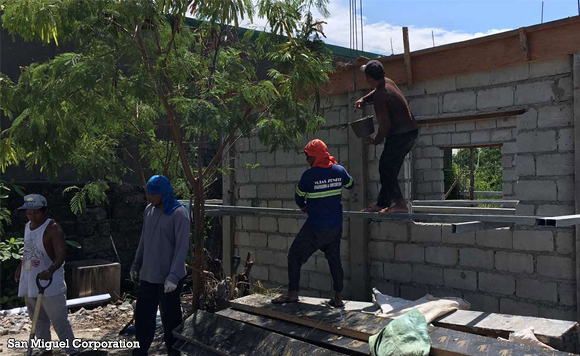 San Miguel Corp. has given ample remuneration and cash rewards for former homeowners and informal settlers of the future site of the new Manila International Airport project in Bulakan town in Bulacan province.

A total of 364 beneficiaries benefited from SMC’s cash assistance, according to local officials.

On the other hand, owners of concrete houses were given the appraised value of their homes, multiplied by two, plus an additional P100,000.

Cash assistance was also provided to 87 others even though they were disqualified.

Another relocated resident, Jimmy San Jose, said he was given a new livelihood source and was now in charge of mangrove planting and mangrove crab production that would be undertaken by SMC in coordination with the Bureau of Fisheries and Aquatic Resources (BFAR).

Under a partnership between SMC and the Technical Education Skills Development Authority (TESDA), 58 former Taliptip coastal residents were able to complete training in different courses geared towards employment during airport construction and full operations.

They were also given opportunities to open businesses that will cater to the airport and surrounding communities.

The two trained under the program and are now working as heavy equipment operators in the ongoing P1 billion Tullahan-Tinajeros dredging project.

Politiko would love to hear your views on this...
Post Views: 27
Spread the love
Tags: Bulakan airport, informal settlers, New Manila International Airport, San Miguel Corp.
Disclaimer:
The comments posted on this site do not necessarily represent or reflect the views of management and owner of POLITICS.com.ph. We reserve the right to exclude comments that we deem to be inconsistent with our editorial standards.