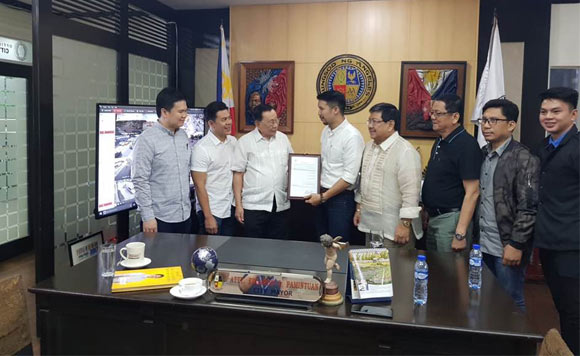 The City of Angeles has a new son!

“[Former] senator, Cabinet secretary on budget, finance, and DFA, and now Chairman of Development Bank of the Philippines, Atty Alberto Bert Romulo, my colleague in the PGMA Cabinet accepting his recognition as the adopted son of Angeles for his continues support of advancing the financing needs of the city of Angeles for the establishments of pro people projects like the modern public cemetery, command center and the like,” said the politiko.

“Salamat po nang marami.. As our slogan in abeka.. WE BUILD THE FUTURE OF ANGELES NOW!” added Pamintuan.

Politiko would love to hear your views on this...
Post Views: 0
Spread the love
Tags: Alberto Romulo, Chairman Alberto Romulo, Department of Foreign Affairs (DFA), Development Bank of the Philippines, Mayor Ed Pamintuan
Disclaimer:
The comments posted on this site do not necessarily represent or reflect the views of management and owner of POLITICS.com.ph. We reserve the right to exclude comments that we deem to be inconsistent with our editorial standards.