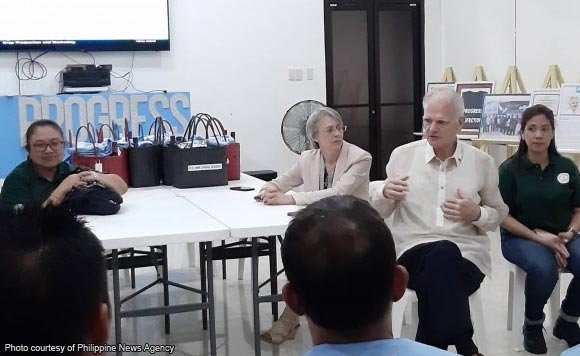 MANILA– The European Union Delegation in Manila has lauded the success of its funded model drug rehabilitation center in Tarlac as European envoys visited the site on Friday, two years since it was opened.

“It is truly heartening to be a witness of this noteworthy achievement. The European Union is proud to have been associated with this amazing work,” EU Ambassador to the Philippine Franz Jessen said in a speech in Tarlac.

Since its establishment, the Tarlac Drug Recovery Clinic has accepted at least 534 patients, with 309 active patients to date.

The Tarlac outpatient recovery clinic is one of the first to be operational out of the six pilot sites identified by the Department of Health. Other sites are in Pasay City, Mandaue in Cebu, Oriental Mindoro, Compostela Valley in Davao and Ifugao.

“This model of care is, comparatively, able to effectively treat a large number of patients, at the same time, it provides quality evidence-based and confidential care,” Jessen said.

In wishing success to the clinic’s administrators, Jessen hoped that the Tarlac Center could support the nationwide roll out of the drug rehabilitation facility’s model.

Jessen said the recognition showcased how the EU collaborates with the government on its fight against illegal drugs as they illustrate their own experiences in addressing drug issues in Europe at the same time.

Politiko would love to hear your views on this...
Spread the love
Tags: Cebu, Compostela Valley, EU Ambassador to the Philippine Franz Jessen, European Union, Mandaue, Oriental Mindoro, Pasay City, Tarlac
Disclaimer:
The comments posted on this site do not necessarily represent or reflect the views of management and owner of POLITICS.com.ph. We reserve the right to exclude comments that we deem to be inconsistent with our editorial standards.