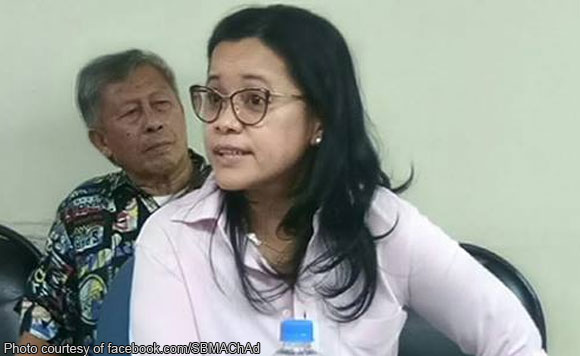 Subic Bay Metropolitan Authority (SBMA) Chairperson and Administrator Wilma T. Eisma shrugged off Monday the graft complaint filed against her by a lawyer before the Office of the Ombudsman.

In an interview by DZRH radio station, Eisma confirmed that she is part of the Board of Directors of TECO (Philippines) 3C & Appliances, Inc., a locator inside the Subic Bay Freeport.

But she clarified that an SBMA company is a part owner of TECO under a joint venture, and she is just representing the agency at the board.

She recalled that some of her predecessors also became members of the board of the said company.

Eisma said she also did not declare in her statement of assets, liabilities and net worth any share in TECO because it is owned by SBMA and not hers.

Lawyer Raymund Palad filed a complaint against Eisma before the Ombudsman for allegedly violating the
the Anti-Graft and Corrupt Practices Act for her failure to divest her shares in TECO and for being a member of the board of the said company.

Eisma said she did not know Palad who filed the complaint against her.

However, she said there could be people who were mad at her because of the reforms she has been implementing inside the Freeport.

She said SBMA even filed charges against some of them.

Politiko would love to hear your views on this...
Post Views: 0
Spread the love
Tags: Administrator Wilma T. Eisma, Philippines, Subic Bay Freeport, Subic Bay Metropolitan Authority
Disclaimer:
The comments posted on this site do not necessarily represent or reflect the views of management and owner of POLITICS.com.ph. We reserve the right to exclude comments that we deem to be inconsistent with our editorial standards.