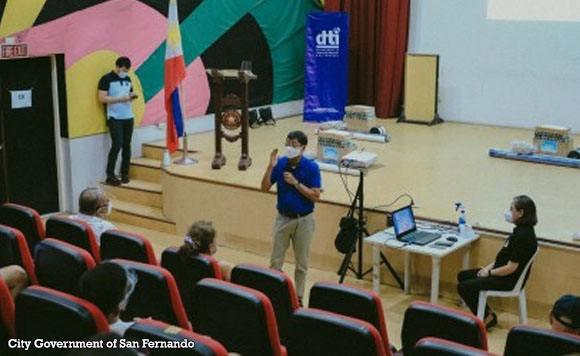 CITY OF SAN FERNANDO, Pampanga – The city government here has rolled out economic recovery assistance to lantern makers who were affected by the coronavirus disease 2019 (Covid-19) pandemic.

The move is part of the city government’s interventions under the Economic Recovery and Rehabilitation Programs (ERRP) aimed at assisting potential and existing micro, small, and medium enterprises here.

Each registered and legitimate lantern maker was given PHP20,000 worth of assistance including cash and lantern-making materials.

San Fernando lantern makers are known for their creativity and craftsmanship that have made the city known as the “Christmas Capital of the Philippines”.

“These beneficiaries underwent validation. We screened them if registered ba sila sa (they are registered with the) Department of Trade and Industry, and if they have business permit issued by our Business License and Permit Division and dapat active member din sila ng (they should also be active members of) lantern-makers association,” Agoncillo explained.

Lantern maker and designer Roland Quiambao thanked the city government for the support and vowed to never stop making lanterns.

The beneficiaries, in exchange, promised to use 30 percent of the assistance given to them in making affordable lanterns that will be sold exclusively to Fernandinos.

Lantern makers and sellers in the province admitted that their sales have been affected by the continuing threat of Covid-19.

Ruby Santos, who has been in the lantern business for 25 years, said people have a tight budget as a result of the health crisis.

Lantern maker Ronald Guarino, who started their business in 2009, also acknowledged the huge impact of the pandemic, saying their sales declined this year.

Guarino said he was forced to reduce their workforce by more than half due to low sales and orders unlike in the past years.

The city government of San Fernando, however, vowed to continuously support the industry amid the pandemic.

He said the committee is exploring the possibilities of celebrating the annual tradition virtually or through online platforms. (PNA)

Politiko would love to hear your views on this...
Post Views: 8
Spread the love
Tags: Economic Recovery and Rehabilitation Programs (ERRP), Mayor Edwin Santiago, Pampanga, San Fernando
Disclaimer:
The comments posted on this site do not necessarily represent or reflect the views of management and owner of POLITICS.com.ph. We reserve the right to exclude comments that we deem to be inconsistent with our editorial standards.