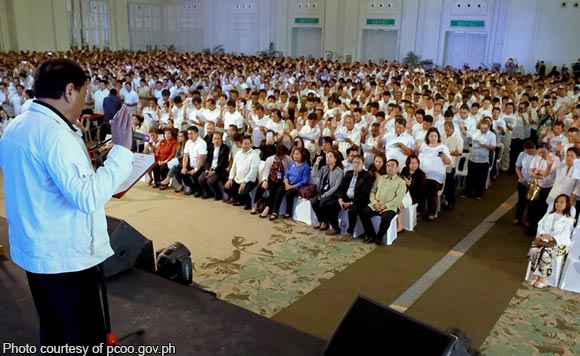 President Rodrigo Duterte urged Tuesday the newly-elected barangay captains in Central Luzon not to be involved in illegal drugs.

Duterte administered the oath-taking of around 3,100 newly-elected barangay officials in Region 3 at the ASEAN Convention Center in Clark Freeport Zone, Pampanga.

Duterte earlier asked Congress to postpone the barangay election twice since he assumed office in June 2016 as this could be used by drug syndicates to fill in their own candidates.

After two postponements, the barangay and Sangguniang Kabataan polls were held on May 14.

Politiko would love to hear your views on this...
Spread the love
Tags: ASEAN Convention Center, Barangay Captains, Central Luzon, Clark Freeport Zone, Crisostomo Garbo, Gloria Macapagal-Arroyo, Mabalacat City, Pampanga, Region 3, Rodrigo Duterte
Disclaimer:
The comments posted on this site do not necessarily represent or reflect the views of management and owner of POLITICS.com.ph. We reserve the right to exclude comments that we deem to be inconsistent with our editorial standards.