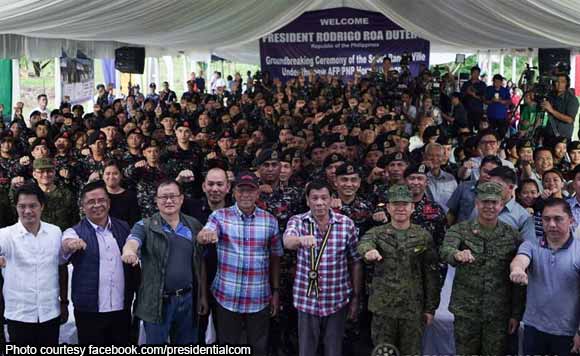 President Rodrigo R. Duterte on Wednesday pledged to buy new helicopters in the next 2 to 3 years to serve more air transport for military troops.

The Scout Ranger Ville is a project of the National Housing Authority (NHA) under the Armed Forces of the Philippines (AFP) and Philippine National Police (PNP) Housing Program. A total of 1000 duplex-type housing units will be built under the project.

The 50-hectare project will have an initial 1,000 housing units under the New Housing Design (Biyaya ng Pagbabago) intended for members of the First Scout Regiment based in Camp Tecson.

During the ceremony, Duterte said that terrorism inspired by ISIS may not end in the next 7 to 10 years, but in the end, he said, the government’s fight against terrorism will prevail.