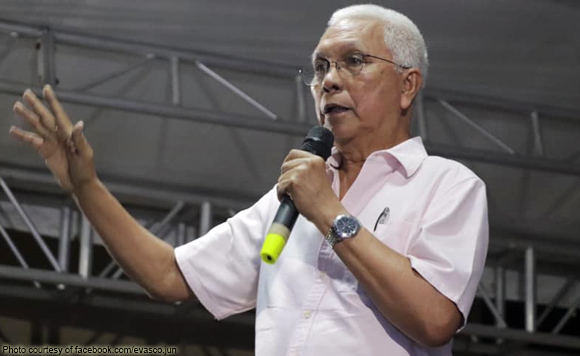 The proclamation of the duly-elected governor was stalled by delays in canvassing of votes in the towns of Sagbayan, Panglao, and Tubigon because of damaged Secure Digital (SD) cards.

Aba said the Commission on Elections (Comelec) in Bohol had to ship the SD cards to Cebu to be repaired.

“I thank the Boholanos for giving me the opportunity to serve them,” Yap was quoted in a radio interview as saying after the canvassing of election results.

Earlier, Evasco vowed to file a petition to declare a failure of election in Bohol allegedly due to “massive vote buying” and fraud in the polls, which Yap quickly dismissed.

“All that changed later in the day, however, as I was starting to be appraised of the magnitude of election irregularities particularly vote-buying. I realized that I will not be the only victim,” said Evasco in the official statement released a day after the mid-term polls.

He said that he “cannot abandon the thousands who packed our rallies, those who declined the proverbial thirty pieces of silver because they placed their hope in a band of men and women they believed would lead Bohol into a new dawn”.

“It is for all of them that I finally arrived at this difficult decision to instruct the Nationalist People’s Coalition-Bohol and Hugpong ng Pagbabago-Bohol to make preparations for the filing of a petition to declare a failure of elections,” Evasco’s statement added.

Yap, for his part, said “there is no failure of elections”.

His running mate, Rene Relampagos, was declared the vice governor-elect of Bohol due to a wide margin over his rival candidate, Tommy Abapo.

Yap was one of the youngest officials to be appointed to the Cabinet by then President Gloria Arroyo in August 2004. He ran for Bohol governor under the Partido Demokratiko-Pilipino (PDP-Laban) while Evasco was under the National People’s Coalition (NPC). (PNA)

Politiko would love to hear your views on this...
Spread the love
Tags: Arthur Yap, Cebu City, Comelec, former Cabinet Secretary Leoncio Evasco Jr., Lawyer Eddie Aba, Panglao, PBOC, PDP-Laban, Sagbayan, Tubigon
Disclaimer:
The comments posted on this site do not necessarily represent or reflect the views of management and owner of POLITICS.com.ph. We reserve the right to exclude comments that we deem to be inconsistent with our editorial standards.