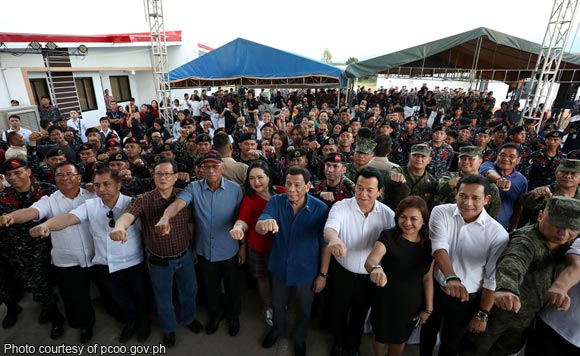 SAN MIGUEL, Bulacan —Living up to his promise to provide decent and affordable housing units for military and police, President Rodrigo Duterte on Monday led the initial awarding of the 500 housing units to the Armed Forces of the Philippines (AFP)’s Army Scout Rangers.

“Owning a house has always been a dream of every Filipino. I urge every beneficiary of this housing program to take good care of these units,” Duterte said in his speech after the ceremonial turnover of the housing units to the beneficiaries.

“May this project further inspire you to serve your nation, deepen your patriotism and foster your sense of family and community,” he added.

The National Housing Authority (NHA) has appraised the value of the 150-square meter housing unit at PHP1.5 million but the government made it only PHP944,000 per unit constructed by Eddmari Construction and Trading.

Duterte, however, reduced further the price to PHP844,000, meaning recipient has to pay only PHP4,000 monthly amortization for a fully-furnished, two-bedroom unit with 60-sq. meter floor area and space for garage.

“Ngayon kasi nakikinig kayo dito, and very behave kayo, (Now because you are listening and you are behave), less 100. So 844. So it’s about 4,000 monthly,” Duterte announced, drawing applause from beneficiaries and their respective families.

NHA general manager Marcelino Escalada Jr. announced that the remaining 500 units of the housing project in San Miguel, Bulacan will be completed by May next year.

Aside from amenities like clubhouse and wet market, Escalada said the Scout Ranger Ville Housing project will have an Olympic-size swimming pool where AFP swimmers can train.

The housing project will also have one unit of three-story,
15-classroom school building.

Politiko would love to hear your views on this...
Spread the love
Tags: Armed Forces of the Philippines, Baguio City, Brig. Gen. William Gonzales, Bulacan, Davao City, Davao Oriental, La Union, Lanao del Norte, national housing authority, Negros Occidental, president Rodrigo Duterte, Samal, San Miguel, Scout Ranger Ville Housing Project, Tarlac, Zamboanga
Disclaimer:
The comments posted on this site do not necessarily represent or reflect the views of management and owner of POLITICS.com.ph. We reserve the right to exclude comments that we deem to be inconsistent with our editorial standards.