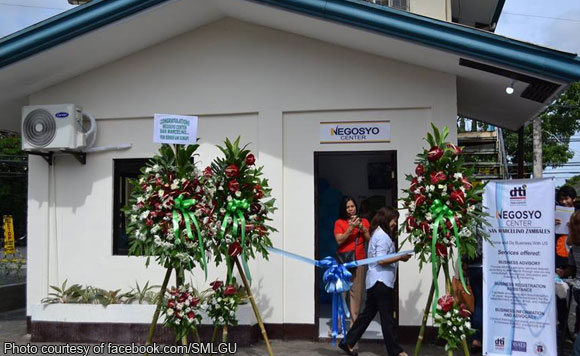 The Department of Trade and Industry (DTI) has launched a business center in San Marcelino, Zambales.

The Negosyo Center was officially rolled out Monday, June 18, through the efforts of San Marcelino headed by Mayor Elvis Ragadio Soria, the local government said.

The DTI’s Negosyo Centers are responsible for promoting “ease of doing business and facilitating access to services for micro, small and medium enterprises (MSMEs) within its jurisdiction.”

DTI Regional Office III earlier said that it is set to open 24 new Negosyo Centers in Central Luzon for this year.

Based on the records of DTI, for 2018, six new Negosyo Centers were planned for opening in Nueva Ecija, five in Zambales, four in Pampanga, four in Tarlac, three in Bulacan and one each in Bataan and Aurora.

The Negosyo Centers were created by virtue of Republic Act No. 10644 or the Go Negosyo Act.

Politiko would love to hear your views on this...
Spread the love
Tags: Department of Trade and Industry, Mayor Elvis Ragadio Soria, Negosyo Center, San Marcelino, Zambales
Disclaimer:
The comments posted on this site do not necessarily represent or reflect the views of management and owner of POLITICS.com.ph. We reserve the right to exclude comments that we deem to be inconsistent with our editorial standards.