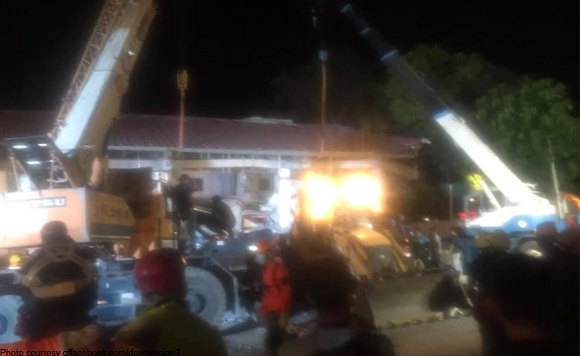 MANILA — The Department of Public Works and Highways (DPWH) will send its disaster response teams to help in areas affected by the 6.1 magnitude quake that jolted some parts of Luzon, including Metro Manila, on Monday afternoon.

In a media advisory posted on the Facebook account of the DPWH Regional Office III, DPWH Secretary Mark Villar instructed the regional director to order less affected neighboring district offices to dispatch teams to areas affected by the disaster.

On Monday, the DPWH closed roads and infrastructures in Pampanga due to damages caused by the earthquake.

People and vehicles are not allowed on the whole stretch of the megadike in Maliwalu, Bacolor, Pampanga after a portion of the structure was damaged by the quake that rocked some areas in Luzon including Metro Manila.

“The east lateral portion of megadike in Maliwalu, Bacolor, Pampanga has been damaged by the 6.1 magnitude earthquake,” the post said.

“The public and all motorists are informed that the whole stretch of megadike has been closed to traffic for everybody’s safety,” it added.

The DPWH added that the Sasmuan-Lubao Road is also not passable to heavy vehicles due to collapsed slope protection and half of the carriageway’s embarkment was scourged. The estimated length of damage is approximately 100 meters.

The Consuelo Bridge in Floridablanca has also been closed to traffic as of 7:00 p.m. last night due to damage.

Rescue operation is ongoing at the Chuzon supermarket in Porac town after it collapsed. Some 40 persons are reportedly trapped inside the supermarket.

The Philippine Institute of Volcanology and Seismology reported that the epicenter of the quake was located in Castillejos, Zambales at around 5:11 p.m. (PNA)

Politiko would love to hear your views on this...
Spread the love
Tags: Bacolor, Department of Public Works and Highways (DPWH), Eugenio Pipo Jr, Luzon, Maliwalu, Mark Villar, Metro Manila, Pampanga
Disclaimer:
The comments posted on this site do not necessarily represent or reflect the views of management and owner of POLITICS.com.ph. We reserve the right to exclude comments that we deem to be inconsistent with our editorial standards.